Thalassarche cauta (Shy albatross) is endemic to Australia and it breeds on three island colonies; Mewstone, Pedra Branca and Albatross islands and non-breeding birds can be found throughout the southern oceans.

The shy albatross averages 90 to 99 centimetres in length, 220 to 256 cm wingspan, and 4.1 kg in weight. This species is considered the largest of the mollymawks or the small albatrosses. It is a black, white and slate-grey bird with the characteristic black thumb mark at the base of the leading edge of the underwing. Adults have a white forehead and a crown, which is bordered on the bottom with a dark eyebrow and pale grey face. Its mantle, tail and upper wing are grey-black, and the rest is white. Its bill is grey-yellow with a prominent yellow culmen and yellow tip.

The shy albatross breeds on rocky islands and builds mounded nests of soil, grass, and roots. They lay one egg in the second half of September. The egg hatches in December and the chick fledges usually in April. Immature birds return to their breeding colony at least 3 years after fledging, mostly beginning breeding when at least 5 to 6 years old, nearly always in their natal colonies.

The shy albatross feeds by a combination surface-seizing and some pursuit diving – it has been recorded diving as deep as 5 m. Fish, cephalopods, crustacea, and tunicates are the sustenance for this species. They frequently follow fishing boats and fish processing discharge comprises a significant proportion of its diet. 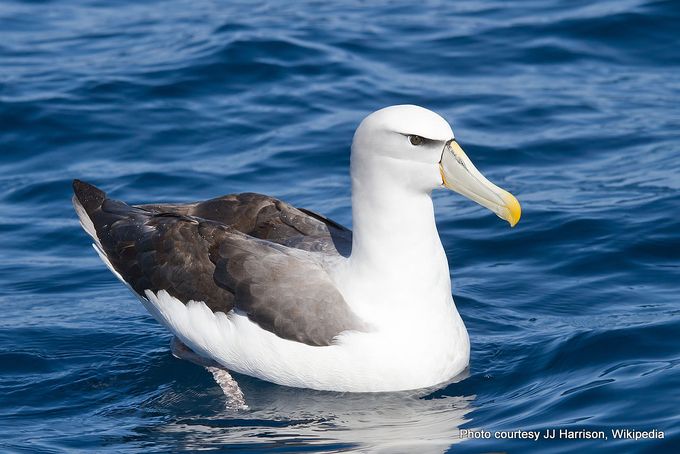 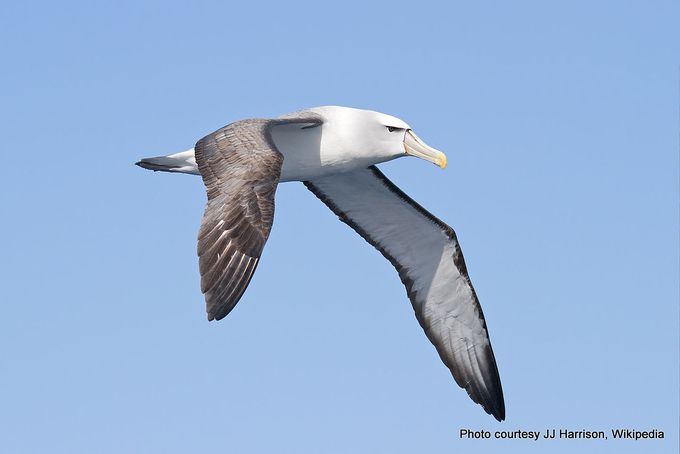