The Grey-headed Albatross (Thalassarche chrysostoma) is a large seabird from the albatross family. It has a circumpolar distribution, nesting on isolated islands in the Southern Ocean and feeding at high latitudes, further south than any of the other mollymawks. It averages 81 cm in length and 2.2 m in wingspan. Weight can range from 2.8 to 4.4 kg, with a mean mass of 3.65 kg. It has a dark ashy-grey head, throat, and upper neck, and its upper wings, mantle, and tail are almost black. It has a white rump, underparts, and a white crescent behind its eyes. Its bill is black, with bright yellow upper and lower ridges, that shades to pink-orange at the tip. Its underwings are white with a lot of black on the leading edge and less on the trailing edge. Juveniles have a black bill and head and a darker nape. Its eye crescent is indistinct and its underwing is almost completely dark.

Grey-headed albatrosses nest in colonies on several islands in the Southern Ocean, with large colonies on South Georgia in the South Atlantic, and smaller colonies on Islas Diego Ramírez, Kerguelen Islands, Crozet Islands, Marion Island, and Prince Edward Islands in the Indian Ocean, Campbell Island and Macquarie Island south of New Zealand, and Chile. While breeding, they will forage for food within or south of the Antarctic Polar Frontal Zone. Birds that roost in the Marion Island area forage for food in the sub-tropical zone. Juveniles or non-breeding adults fly freely throughout all the southern oceans north to 35°S.

A single egg is laid in a large nest, typically built on steep slopes or cliffs with tussock grass and incubated for 72 days. Studies at South Georgia's Bird Island have shown that the growing chick is fed 616 g (21.7 oz) of food every 1.2 days, with the chick increasing in weight to around 4,900 g (170 oz). Chicks then tend to lose weight before fledging, which happens after 141 days. Chick will generally not return to the colony for 6–7 years after fledging, and will not breed for the first time until several years after that. If a pair has managed to successfully raise a chick it will not breed in the following year, taking the year off. During this time spent away from the colony they can cover great distances, often circling the globe several times.
At sea, the grey-headed albatross is highly pelagic, more so than other mollymawks, feeding in the open oceans rather than over the continental shelves. They feed predominantly on squid, taking also some fish, crustacea, carrion, cephalopods, and lampreys. Krill is less important as a food source for this species, reflecting their more pelagic feeding range. They are capable of diving as deep as 7 m to chase prey but do not do so frequently. (Wikipedia) 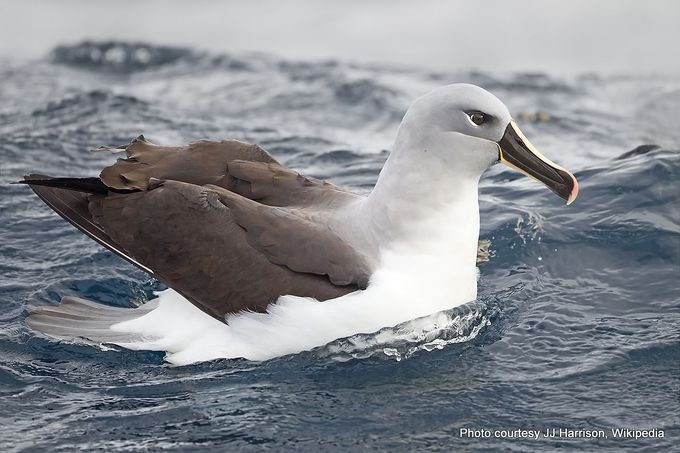 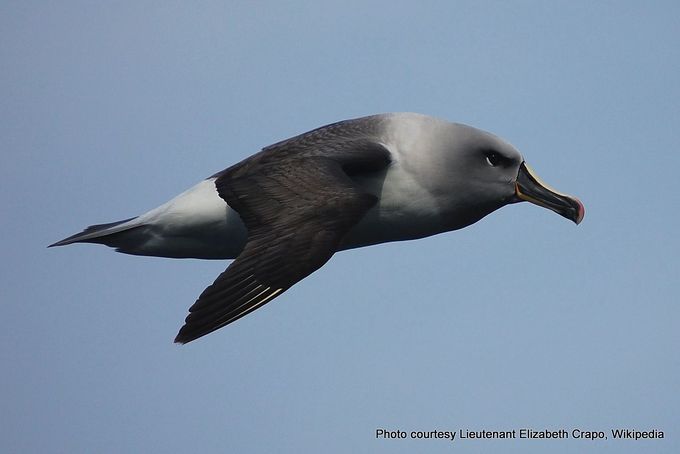