Mohoua albicilla is a species of small songbirds endemic to New Zealand.
Mohoua albicilla are small (15 cm in length) with a compact body, short tail and bill and long legs. The head and underparts are white or whitish. Upper parts, wings and tail are brown-grey. The bill, legs and eyes are dark. Its distinct white head and underparts make it easily distinguishable from other small passerines like the sparrow and the silvereye.
It was formerly quite common and widespread in native forests in the North Island but it has suffered a marked decline in the past two centuries since European colonisation and today is restricted to a fraction of its former range. Their numbers have declined dramatically due to forest clearance and predation by introduced mammals (particularly ship rats and stoats).
They are now generally restricted to the larger tracts of older scrub and native forest that remain in the North Island but have proven their adaptability by establishing populations in a number of exotic pine plantations, particularly on the North Island Volcanic Plateau. They are surviving well on several offshore islands including Little Barrier Island (where it is the most common forest bird), Great Barrier Island and Kapiti Island.
Mohoua albicilla were reintroduced to Taranaki after being absent for about 150 years when on the 10th May 2014 they were introduced to Rotokare Scenic Reserve, New Zealand's largest inland pest-free sanctuary. The birds made the 395km journey from Little Barrier Island to Lake Rotokare, near Eltham, via helicopter and car.

In the past Mohoua albicilla held a special place in Maori culture. They were viewed by Maori to have roles as messengers of the gods and live birds were caught and used in several different kinds of ceremonial rites.\ 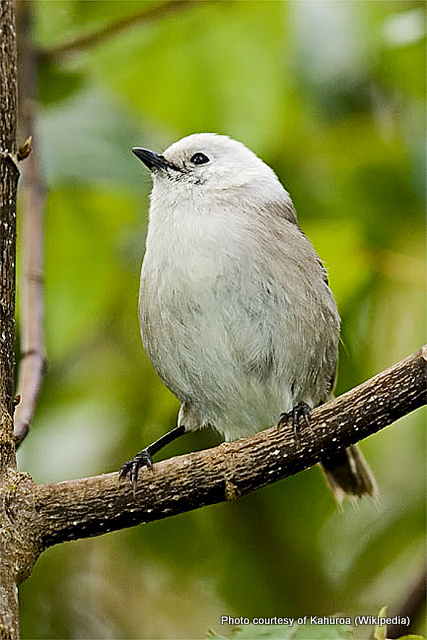