Whitebait belong to the Galaxiidae family, which was named after the Milky Way galaxy because the first species described was sprinkled with dazzling spots.
Galaxias maculatus (Inanga ) the juveniles have a small mouth with lower and upper jaws even dorsal fin directly above anal fin large black spots ahead of dorsal fin sometimes right forward and along the sides translucent, blue-green when fresh; glassy clear 50-65mm. Inanga is by far the most commonly caught species of whitebait.
All whitebait species spend part of their life cycle in freshwater and part in the sea. Tiny fish hatch in late autumn and are carried along rivers out to sea where they live and grow over the winter. Inanga (Galaxias maculatus) In late winter and early spring migrate back up rivers and streams, finally settling and growing in bush covered streams and swamps. The start of the migration is thought to be influenced by river flows (i. e. shortly after floods) and phases of the moon.
Mature inanga adults migrate downstream to lower river sections and estuaries to spawn in grasses covered by water during spring tides. The eggs remain in the grass until the next spring tide covers them again when the young hatch and are carried out to sea. They generally survive one year reaching a length of 100mm.
In 1870s Chinese gold miners on theWest Coast of the South Island dried and exported whitebait. Commercial canning of the juvenile fish by Pakeha began in 1891 in Hokitika. 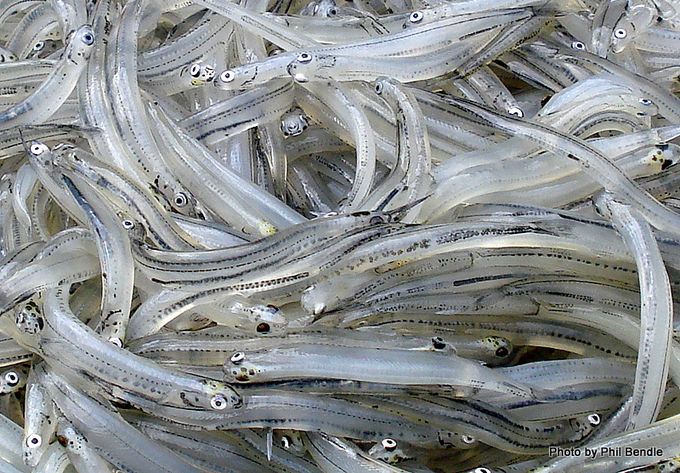