The word "Weta" is strictly a New Zealand name for a large flightless nocturnal grasshopper.

Tree weta (Hemideina thoracica) are those most commonly found throughout the North Island apart from the Wellington-Wairarapa region. They are up to 40 mm long and most commonly live in holes in trees formed by beetle and moth larvae or where rot has set in after a twig has broken off. The hole, called a gallery, is maintained by the weta and any growth of the bark surrounding the opening is chewed away. They readily occupy a preformed gallery in a piece of wood (a weta motel) and can be kept in a suburban garden as pets. A gallery might house a harem of up to ten juveniles of both sexes, females and one male. They favour the tree Putaputaweta (Carpodetus serratus). The name of this tree derives from the fact that holes that occur in the trunk are where weta often live. Putaputaweta in Maori means "many wetas" - refers to wetas living in the holes left by Puriri moth larvae.

Tree weta is nocturnal. They eat the leaves of many different plants but prefer the softer leaves of species such as Mahoe or Karamu and they also eat small insects.
The males, which usually have much larger jaws than the females and hiss and bite when threatened. Like grasshoppers, they have ears on their front legs.
Tree weta bites are painful but not particularly common. Weta can inflict painful scratches, with the potential of infection, but their defence displays consist of looking large and spiky and they will retreat if given a chance. Tree weta arch their hind legs into the air in warning to foes and then striking downwards so that the spines could scratch the eyes of a predator. Pegs or ridges at the base of the abdomen are struck by a patch of fine pegs at the base (inner surface) of the legs and this action makes a distinctive sound. These actions are also used in defence of a gallery by competing males.
The female weta looks as if she has a stinger (see photo below), but it is an ovipositor, which enables her to lay eggs inside rotting wood or soil. Most wetas lives for around 2 years, during which they evolve from an egg to a series of immature forms, known as instars, and finally to full adult maturity.

A video of a large male weta looking for water to drink.  This a high definition video courtesy of Kathy Bass
Click image 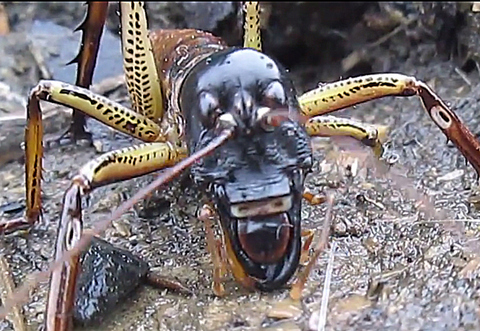 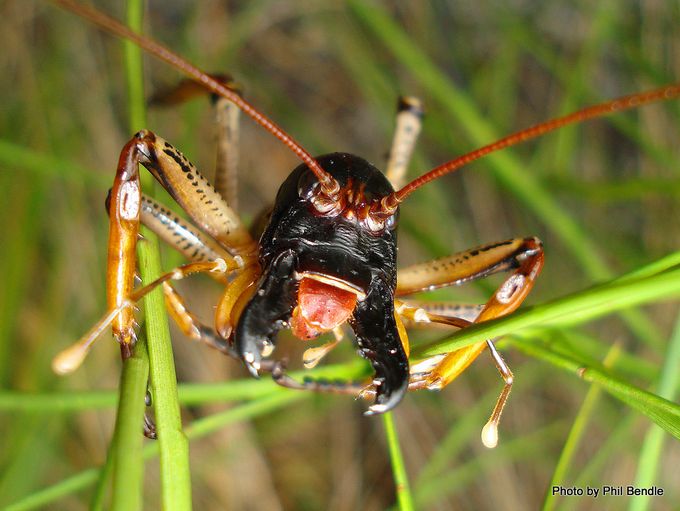 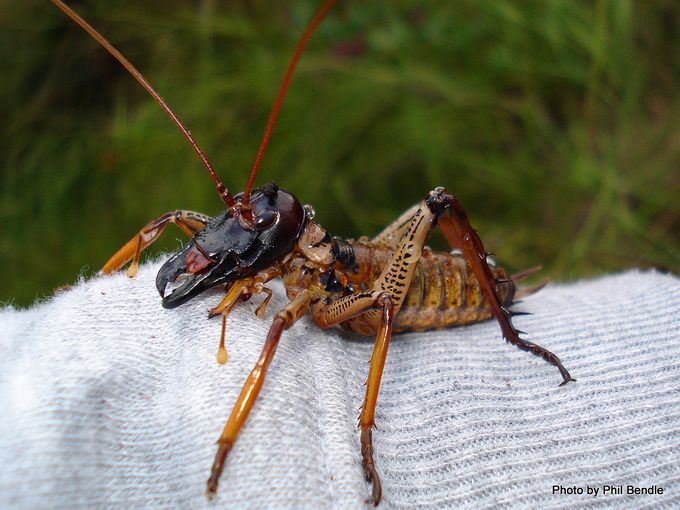 A male tree weta defending itself raising his spiny hind legs over their .backs and opening its jaws.
His gallery was inside the clay wall hanging 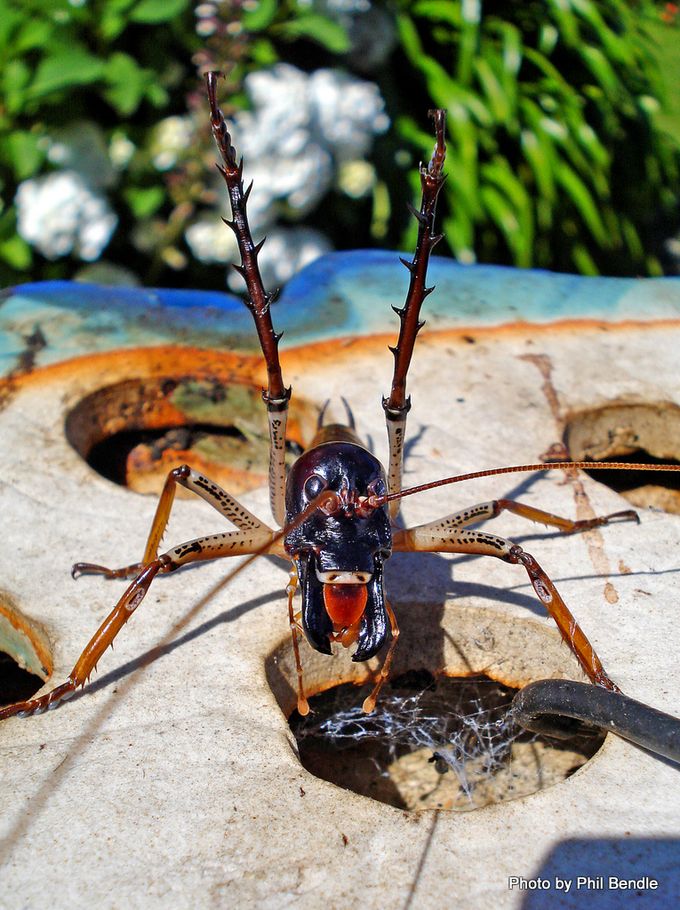 A young male in defensive stance 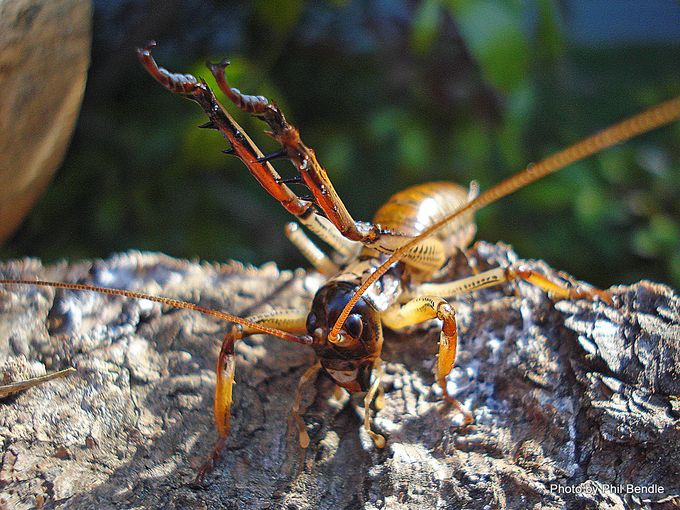 A male weta.
The pair of antenna-like appendages at the rear of the weta abdomen are called cerci. They are sensory organs covered in hundreds of filiform mechanosensory hairs that are sensitive to low-amplitude air currents. 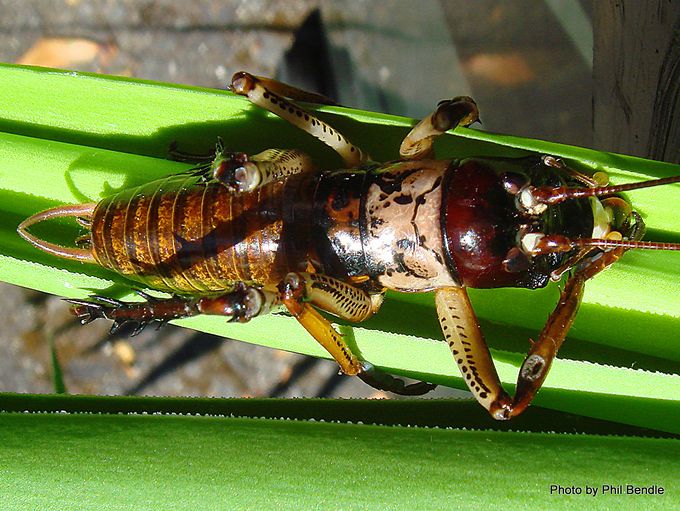 Circi of the male tree weta 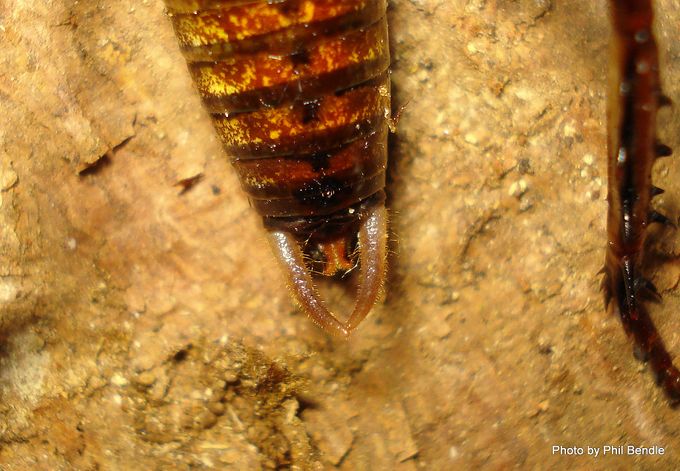 Head of a young male, mandibles not fully developed.  The paddle-like palps around the jaws give the weta sensory information.  It can taste its food before taking a bite. 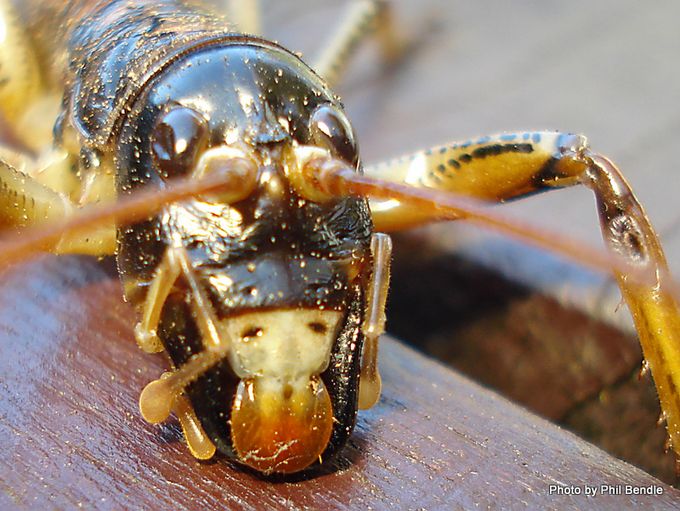 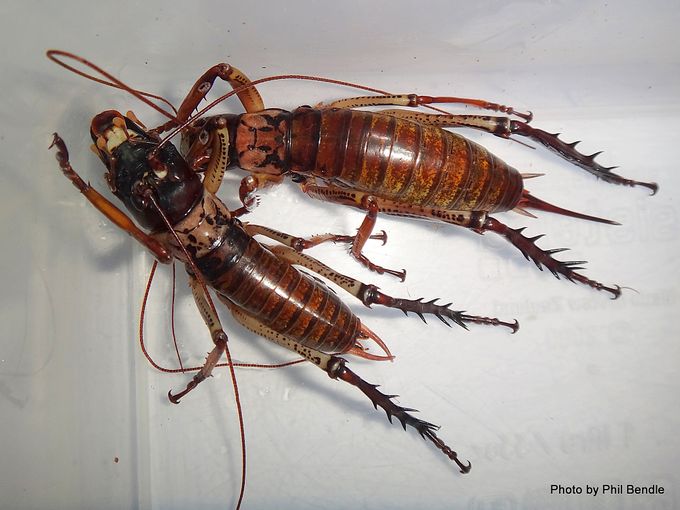 A photo of a female with her ovipositor. 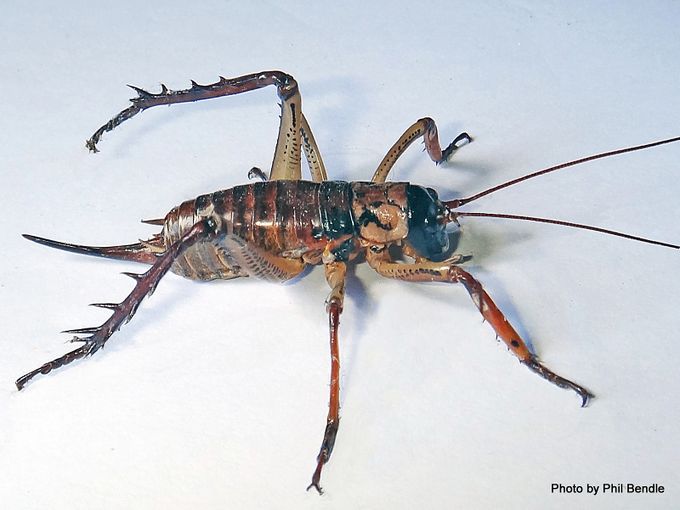 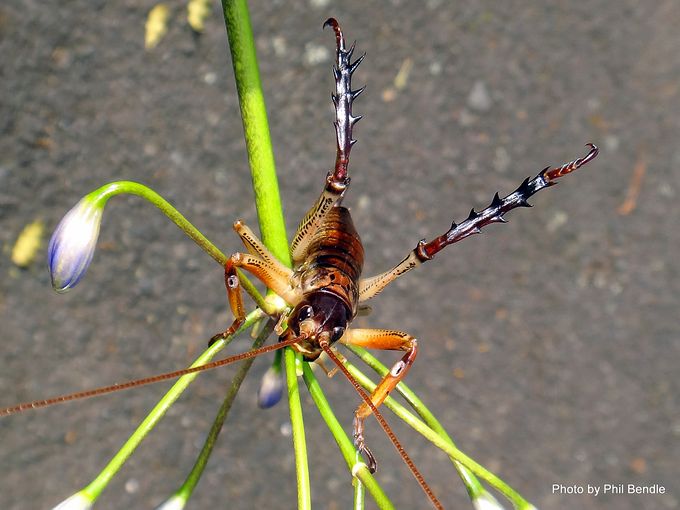 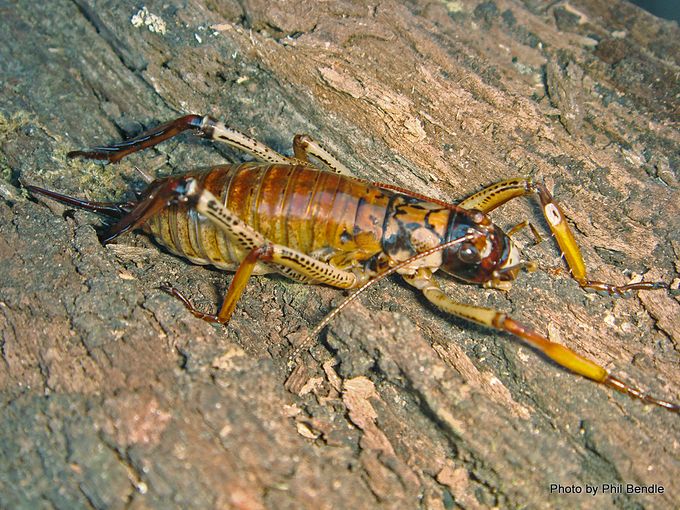 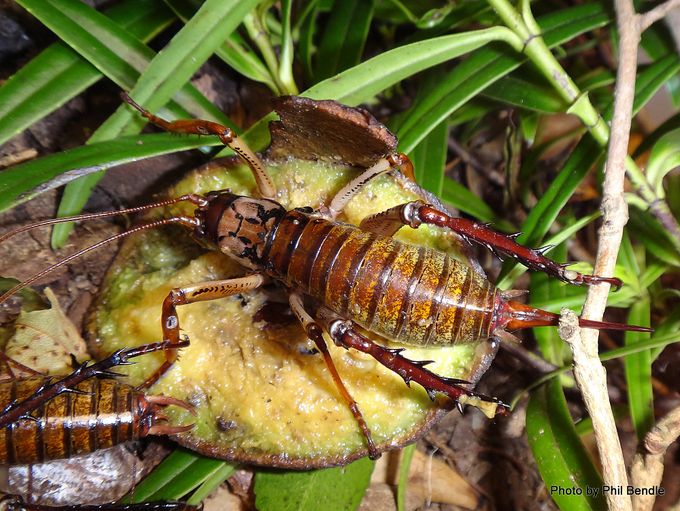 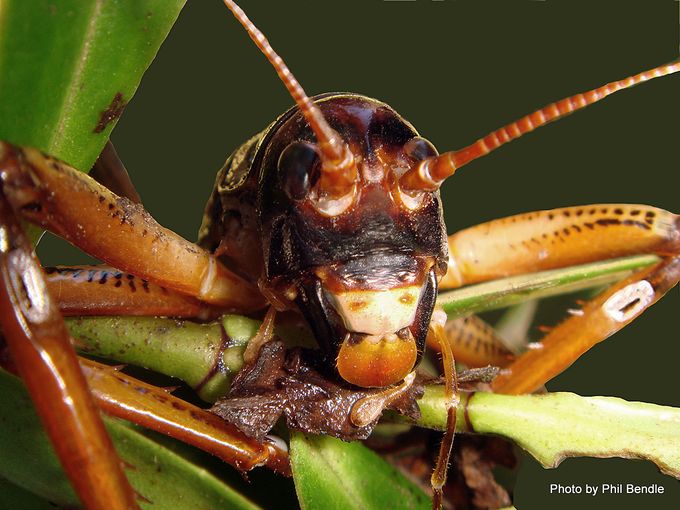 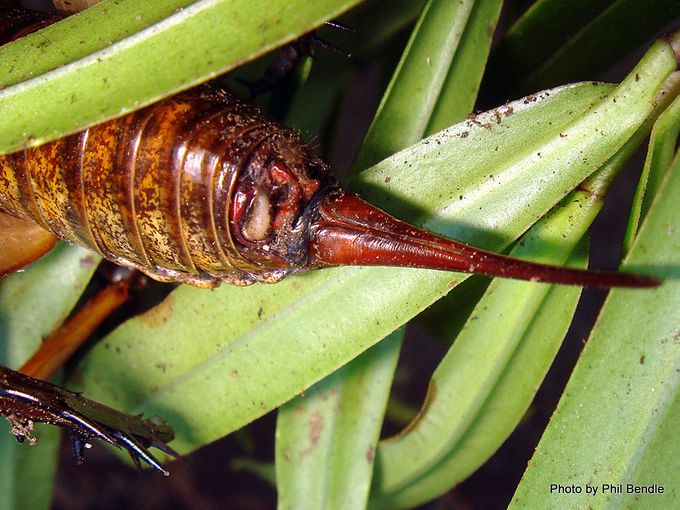 A young adult female with her small developing ova ''''depositor.'''' 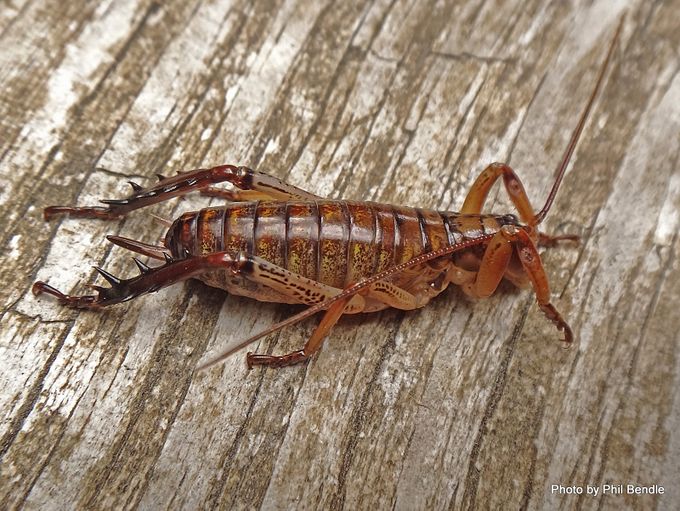 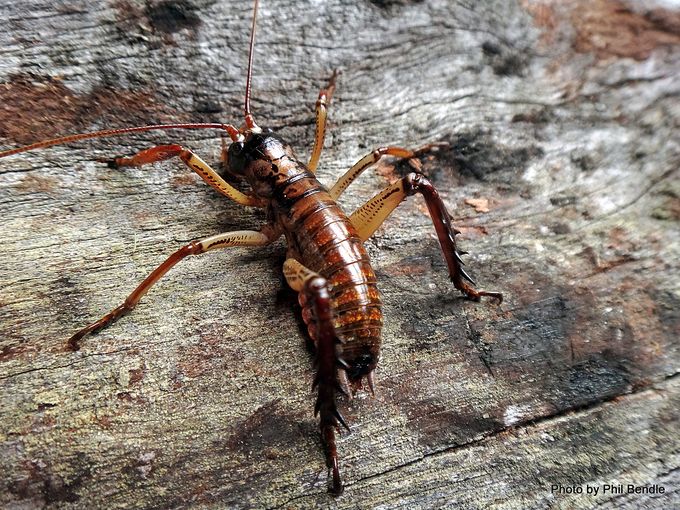 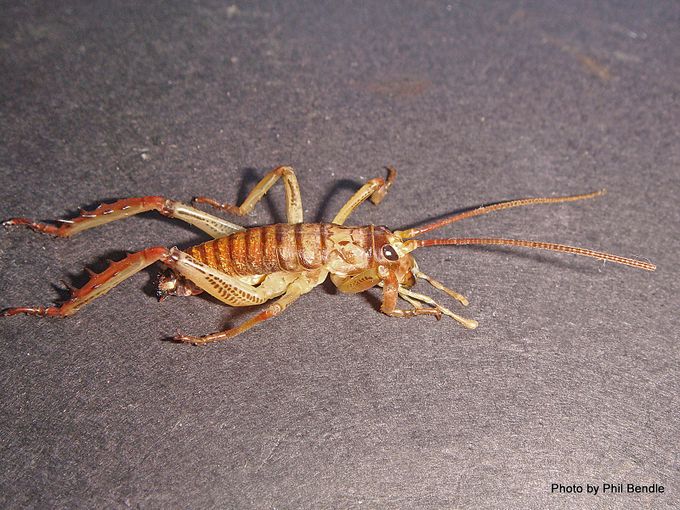 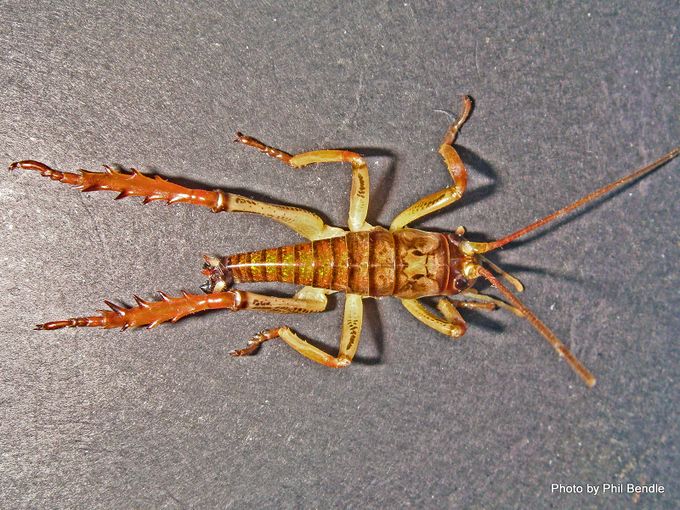 Small weta nymph with a body length of 12 mm. 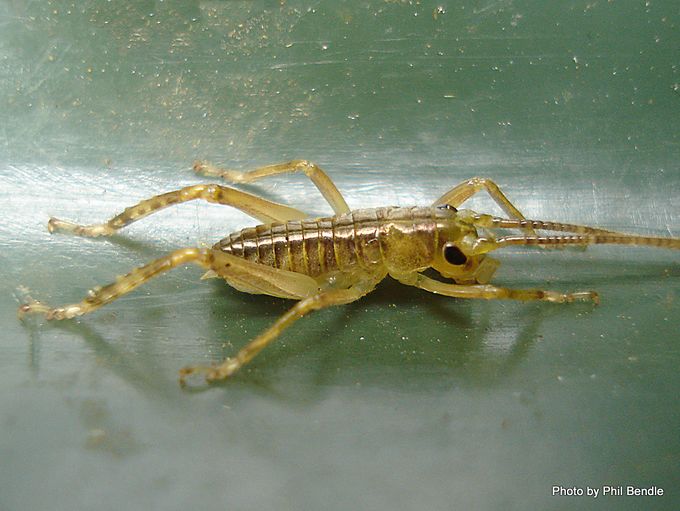 For an article on "The Diet and Nutritional Ecology of the Auckland Tree Wētā Hemideina thoracica" by Brown, Matthew.    http://researchcommons.waikato.ac.nz/handle/10289/8771

More information at the Department of Conservation and at  http://weta.boarsnest.net/index.htm