The New Zealand Praying Mantis is usually bright green in colour (rarely yellow) with a thorax that is broad and flat and nearly the same width as the abdomen. They have a bright blue and purple patch on the inside of their front legs. They are commonly found amongst garden foliage, were they food ambushes small insects.
They lay eggs in foamy egg case called an ootheca. The ootheca has a woody appearance and has straight uniformed sides. They are usually attached to a leaf, stem, wall or fence.
After serval months the young hatch as smaller versions of an adult. After hatching the tiny mantids’ exoskeletons hardened and so to increase their size the young mantids have to moult. To reach adulthood the young go through 7 moults over 5 to 6 months.

The African species (Miomantis caffra) is not considered a pest species, but it is thought to be displacing the New Zealand native species (Orthodera novaezealandiae) in urban environments of northern New Zealand. When a New Zealand native praying mantis tries to mate with Miomantis caffra, the African species immediately kills it. This is thought to be a reason why the NZ species (Orthodera novaezealandiae) are in decline.
There has been researching done into the pheromone attraction of the NZ mantis male to the SA female.
https://www.sciencenews.org/blog/gory-details/cannibalistic-mantis-invades-new-zealand-eats-natives


Sex determination: One can find what the sex is of all species of mantis by counting the abdominal segments. A female mantis generally has 6 segments while males have 8.  When counting the segments don’t count the segments that have the wing buds on them (mesothorax/metathorax).

There are 2 main differences in the appearance of the two species found in New Zealand.
The first main difference is body shape.
The NZ Praying Mantis (Orthodera novaezealandiae).
The thorax area between the front legs is as wide as the head and tapers gradually back to the waist.
They are usually green very rarely yellow.
The SA Praying Mantis (Miomantis caffra)
The thorax area between the first two pair of legs is narrower than the head
They are green to pale brown and often larger than the NZ mantis.
The second main difference
The NZ Praying Mantis (Orthodera novaezealandiae) has a vivid blue and purple patch on the inside of its front leg.
The SA Praying Mantis forelegs have 4-6 dark spots on the inner surface of coax. The femur has 2 small, dark, proximal patches.
Other differences between the two species.


The NZ mantises both sexes can fly. 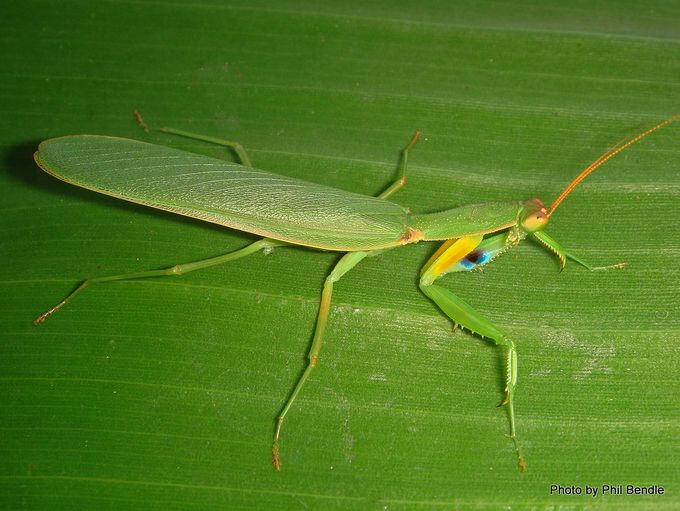 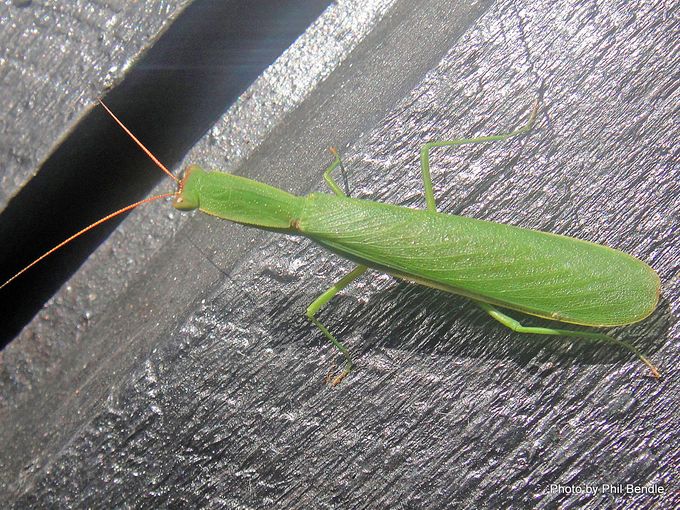 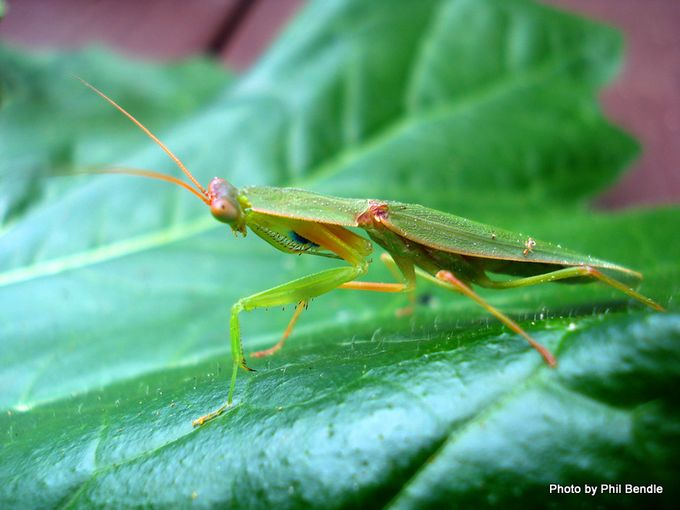 The photo below shows the difference between Orthodera novaezealandiae (New Zealand Praying mantis) and the African species, Miomantis caffra. Check the inside of the forelegs. The African species have a narrower waist.  (Click to enlarge) 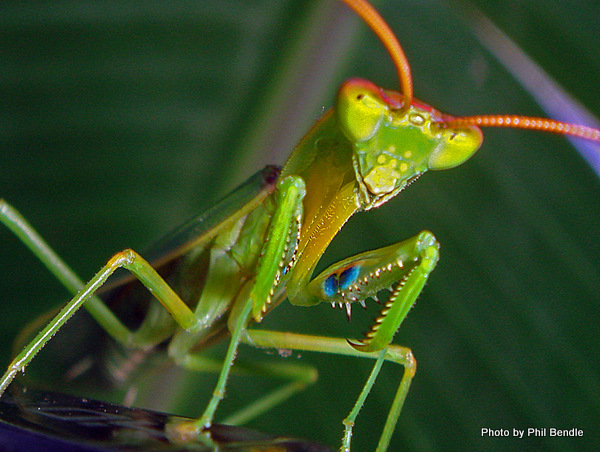 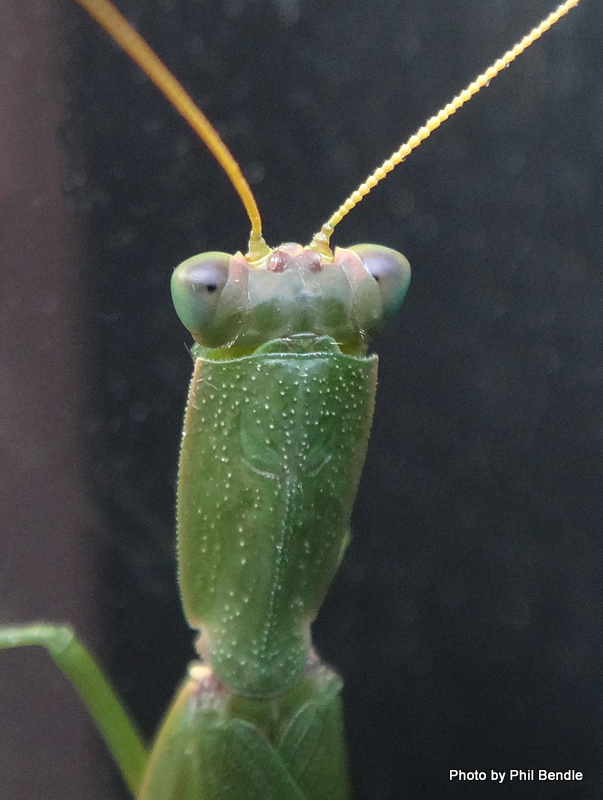 Photo showing the wing covers and the wings. Both male and female have clear hindwings. 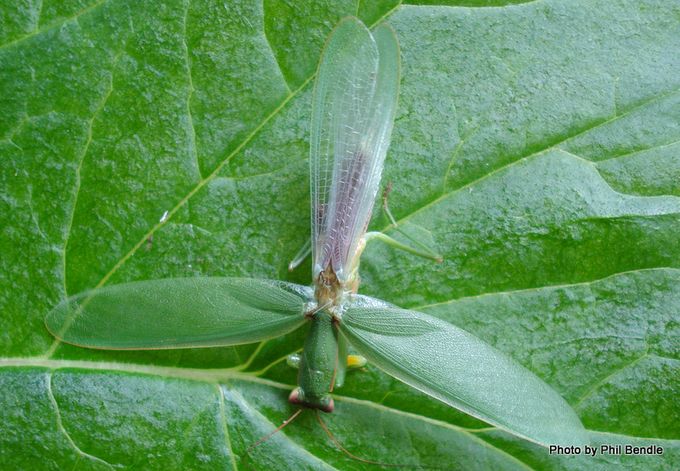 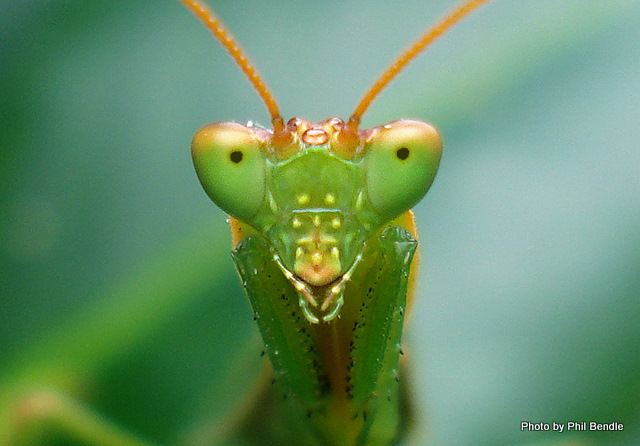 Photos below are of a mantis nymph (immature male) 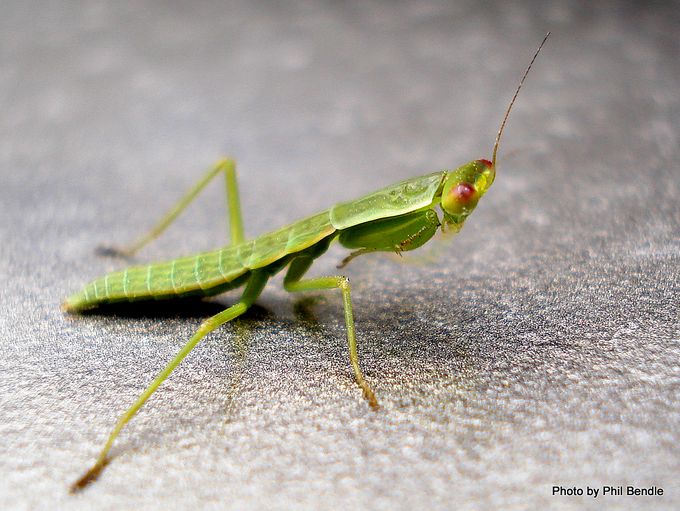 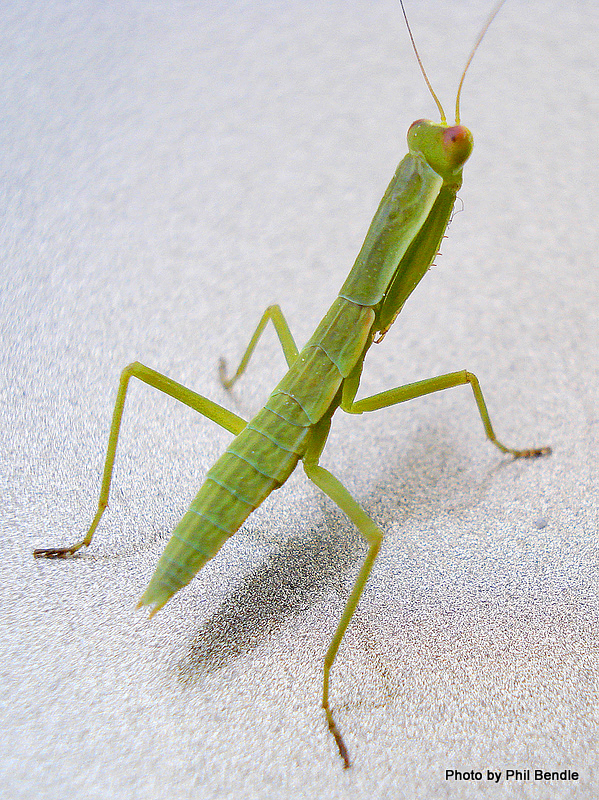 An Orthodera novaezealandiae's ootheca (egg mass) It is smaller and neater than the introduced African mantis and the cells are visible. The African egg mass has a tapered end and has a foam-like covering.


The NZ one when fresh have a white fluffy net over them. They also have figure 8 shaped cell entrances.The case below is one day old.

Close up of ootheca (egg case)
. 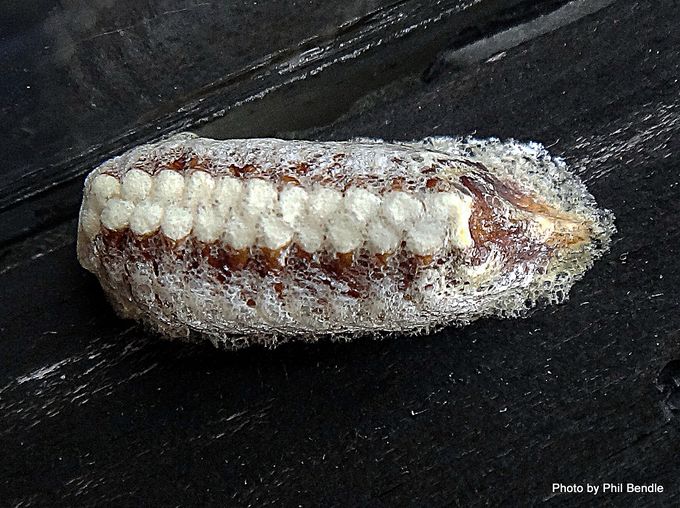