Miomantis caffra is a species of praying mantis native to Southern Africa. It was discovered in Auckland, New Zealand in 1978. The adults 32-60 mm long, They are predacious, that is they catch insects.
They can be variable in colour, green to brown and they lack the blue patch on the front legs that are visible on New Zealand praying mantis. African female praying mantis will eat a male after (and while) they mate.
The Miomantis caffra usually hides under leaves The egg case is fawn and when laid it is foamy like meringue, which then hardens.


Research
There has been researching done into the pheromone attraction of the NZ mantis male to the SA female.
https://www.sciencenews.org/blog/gory-details/cannibalistic-mantis-invades-new-zealand-eats-natives

Sex determination: One can find what the sex is of all species of mantis by counting the abdominal segments. A female mantis generally has 6 segments while males have 8.  When counting the segments don’t count the segments that have the wing buds on them (mesothorax/metathorax).

There are 2 main differences in the appearance of the two species found in New Zealand.
The first main difference is body shape.
The NZ Praying Mantis (Orthodera novaezealandiae).
The thorax area between the front legs is as wide as the head and tapers gradually back to the waist.
They are usually green very rarely yellow.
The SA Praying Mantis (Miomantis caffra)
The thorax area between the first two pair of legs is narrower than the head
They are green to pale brown and often larger than the NZ mantis.

The second main difference
The NZ Praying Mantis (Orthodera novaezealandiae) has a vivid blue and purple patch on the inside of its front leg.
The SA Praying Mantis forelegs have 4-6 dark spots on the inner surface of coax. The femur has 2 small, dark, proximal patches.

A winged male. Females are not winged.. 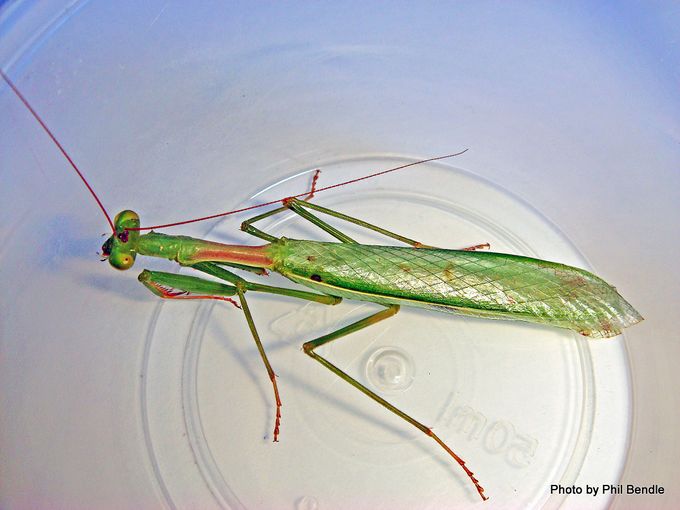 The underside of a male. 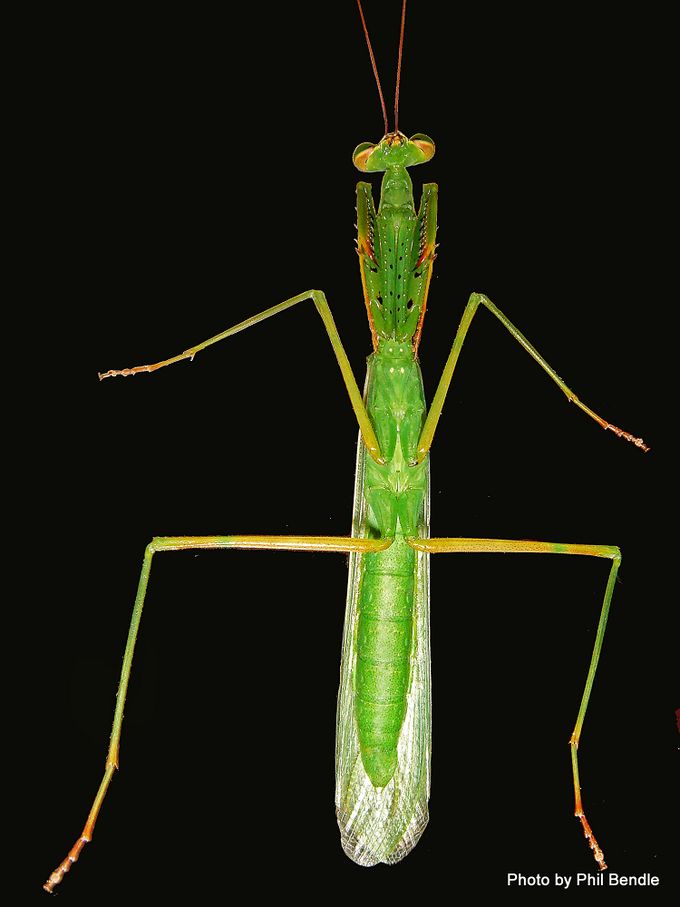 A female with a winged male. 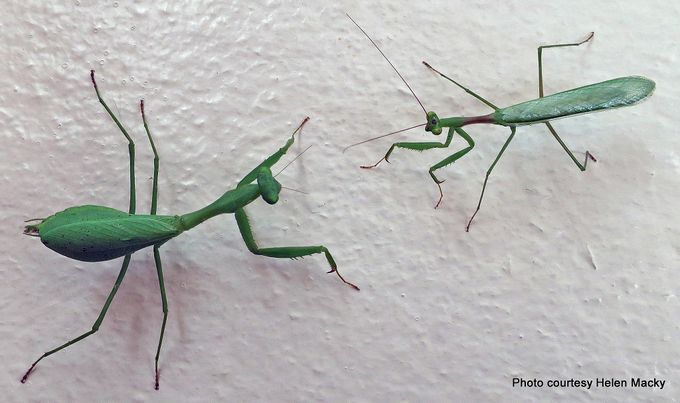 A photo showing the wings of a male African praying mantis. The male's antennae are longer than the females. 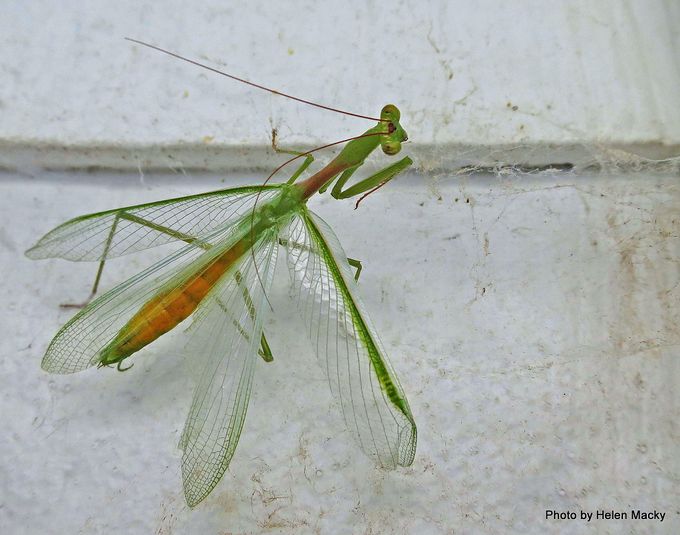 A female mantis lures males with her pheromones, and when one approaches, the prospective mate engages in a courtship dance. If the daring he-mantis is deemed worthy, he is allowed to hitch a ride on the much larger female's back and commence fertilization. Mating can last several hours.
A female praying mantis often decapitates and ingests the head of her mates after copulation, a phenomenon biologists refer to as “sexual cannibalism. This it occurs in 13–28% of the matings 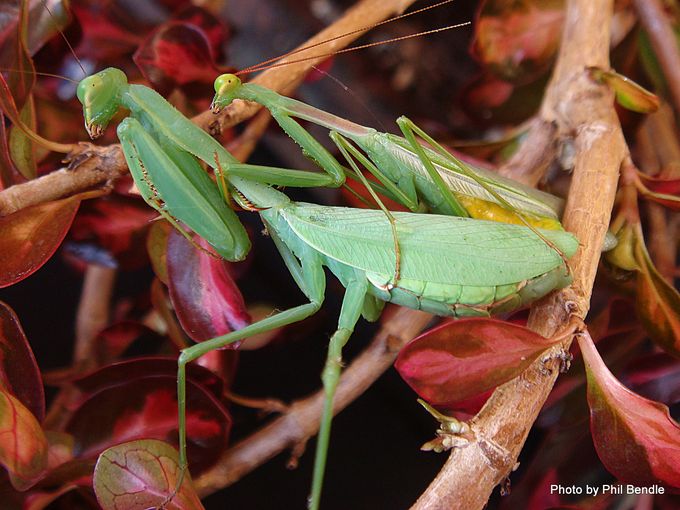 The male is carried by the larger female. The mantis reproductive organs are located on the tip of their abdomens. 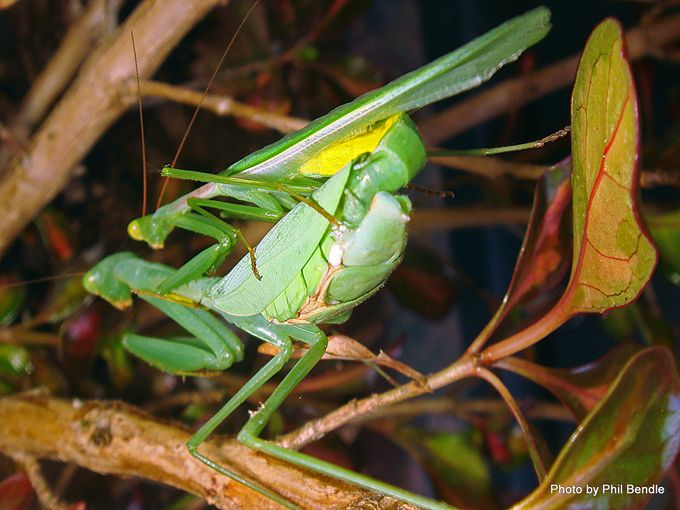 A female laying an egg mass on some fabric hanging on a clothesline. 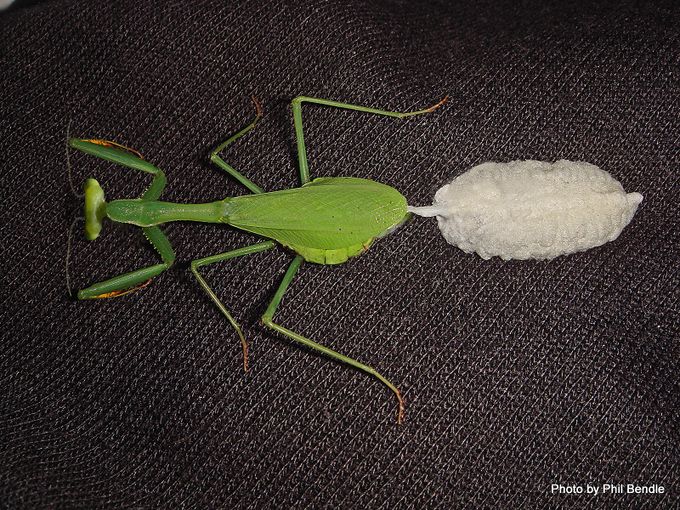 Note the dark pigment spots on the inner surface of the fore-femur, an identifying feature of the African praying mantis species. The number can vary. 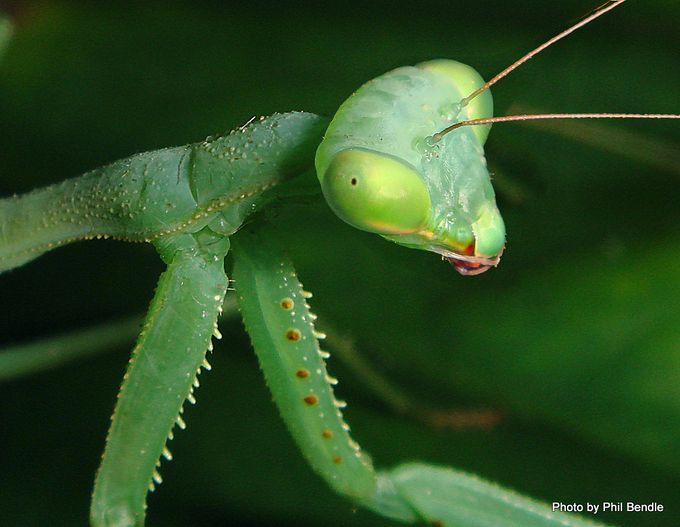 The photo below shows the difference between Orthodera novaezealandiae (New Zealand Praying mantis) and the African species, Miomantis caffra. Check the inside of the forelegs. The African species have a narrower waist. (Click to enlarge) 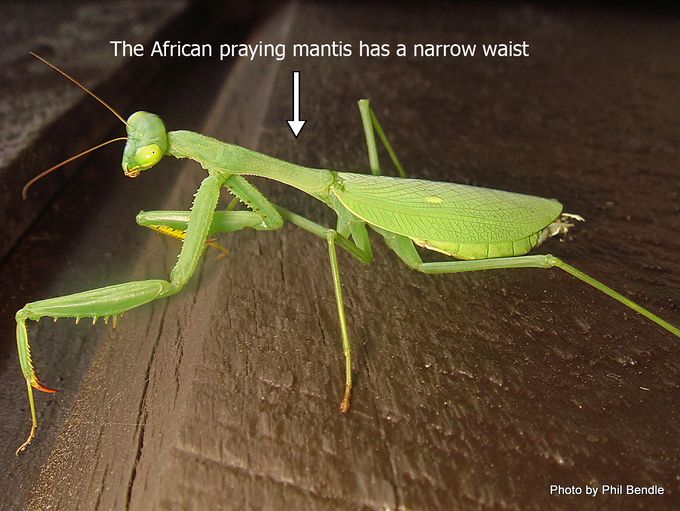 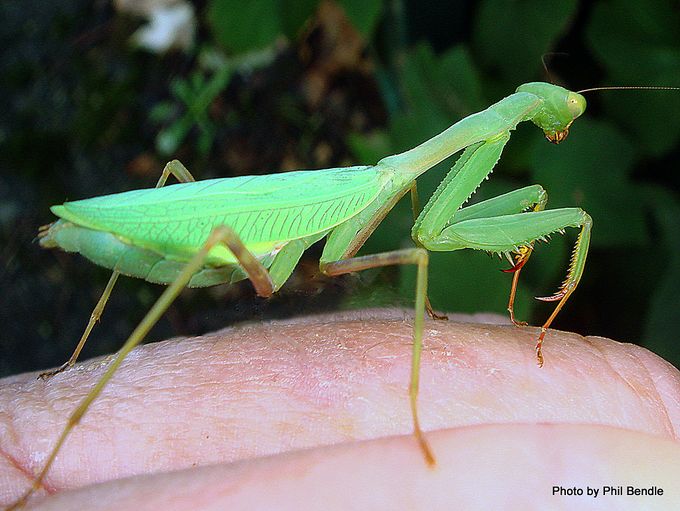 A female full of eggs. eggs. 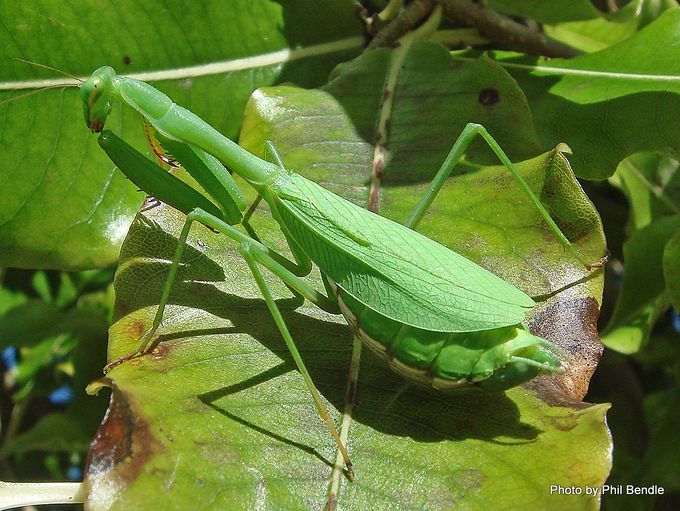 A male that was attracted to a light. 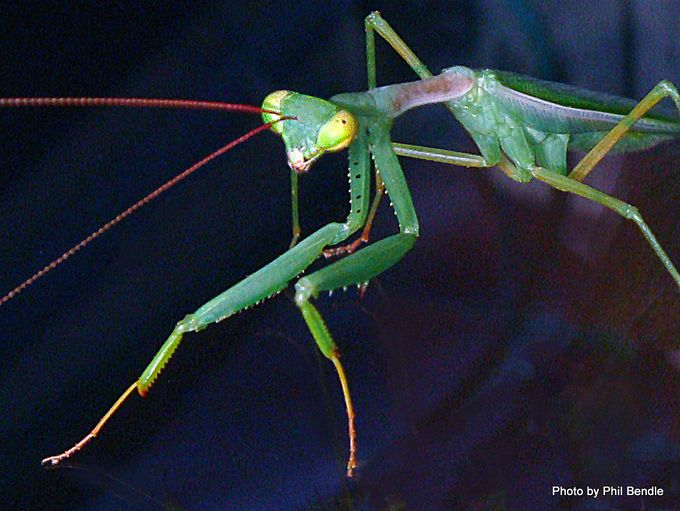 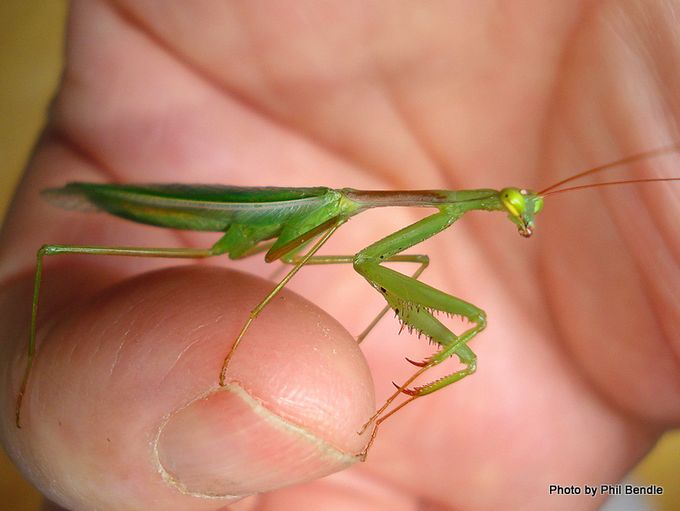 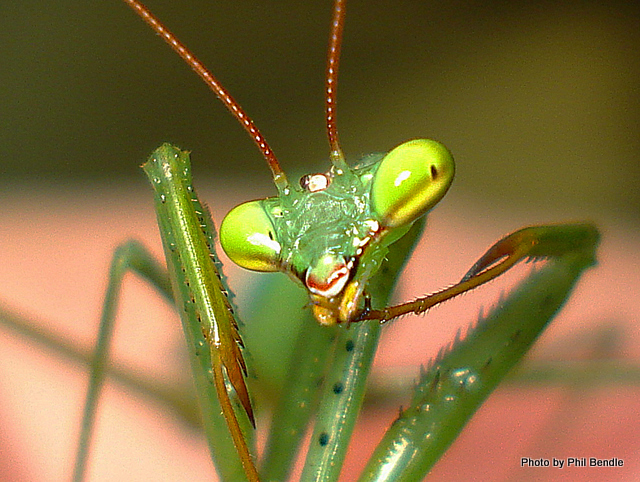 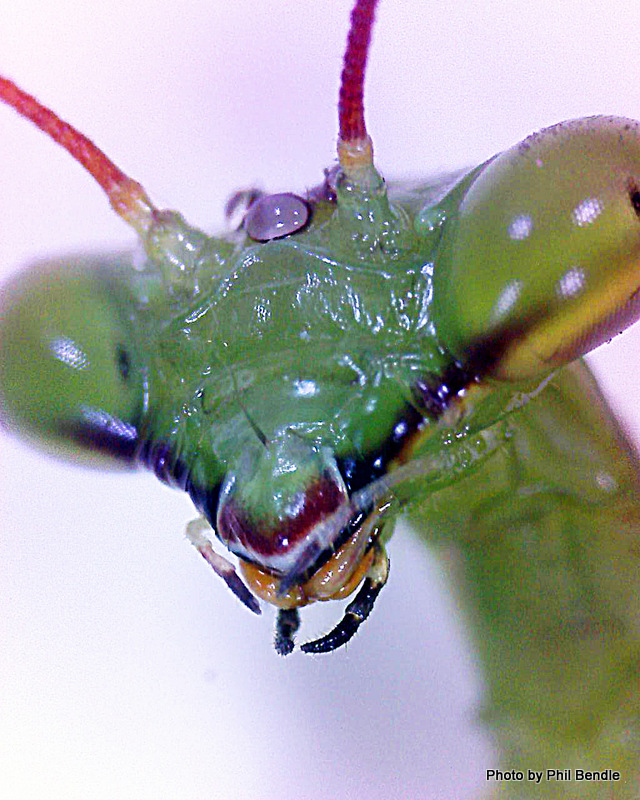 A yellow form among the flowers of Solanum laxum. Note the distinctive row of spots on the top of the body. 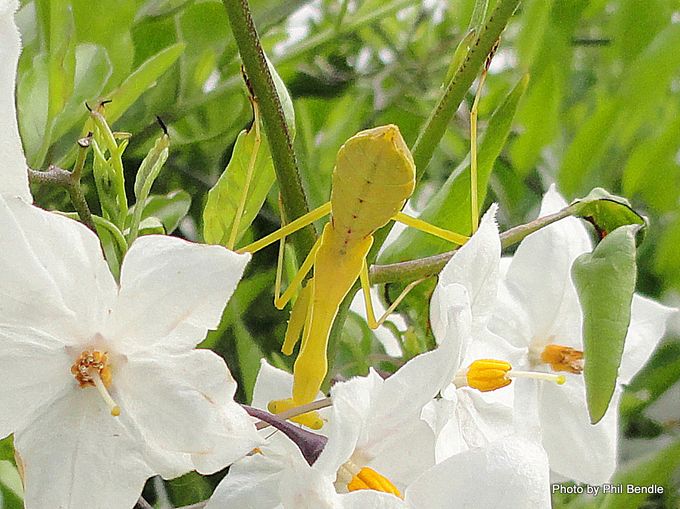 Photos of juveniles below. 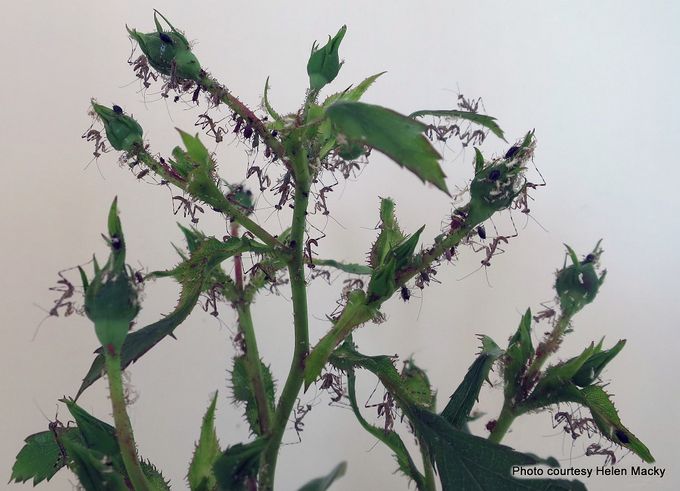 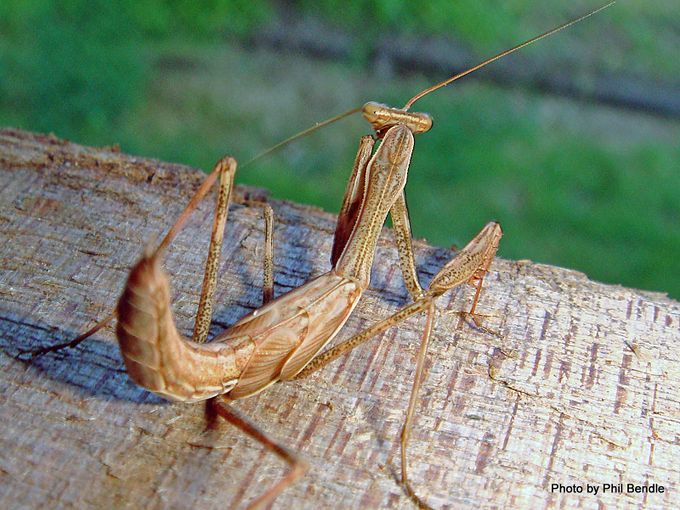 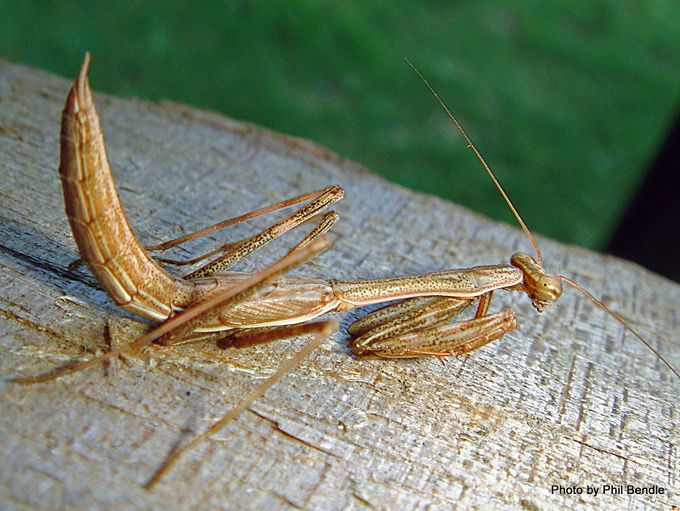 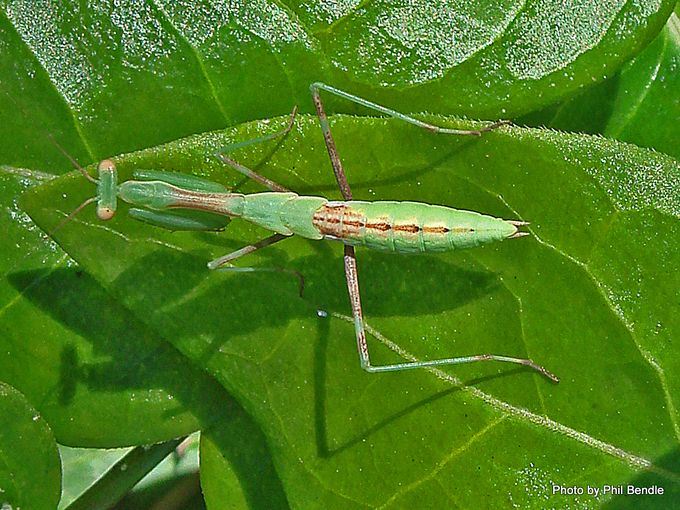 A tiny juvenile just hatched on my finger. 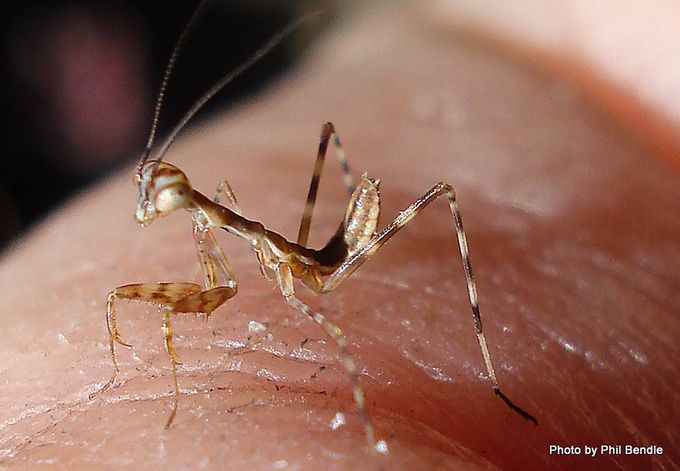 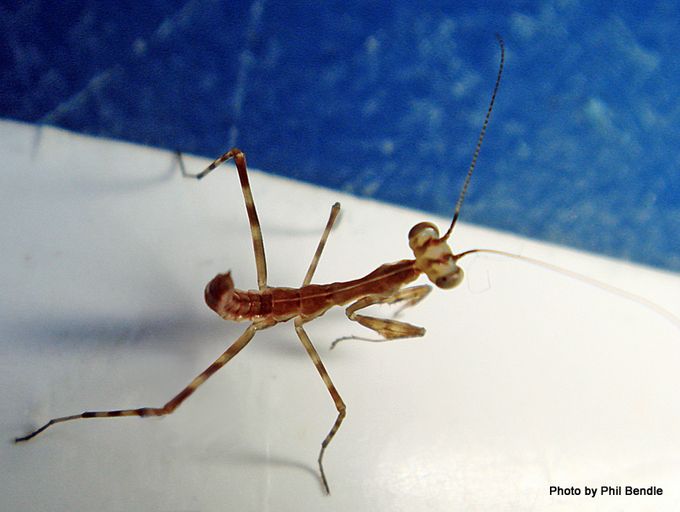 This object is an ootheca, (or egg case), deposited by a Miomantis caffra praying mantis. The ootheca is a system used by a number of invertebrates, including many molluscs and a number of the insects such as cockroaches and praying mantis. The mantis lay their eggs into a foamy protein which hardens and forms a protective case. Usually laid on vegetation or sometimes a surface like a wall or brickwork. The young can take 3-6 months to emerge.The ootheca of Miomantis caffra always has a tapered end on them like you get when you put toothpaste on a toothbrush. 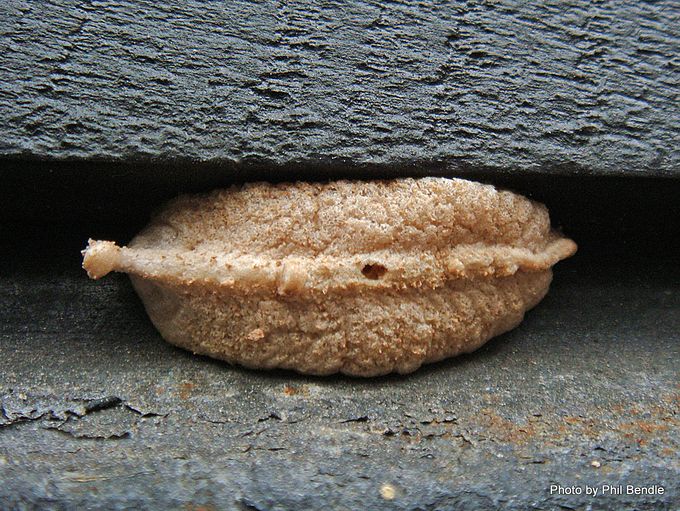 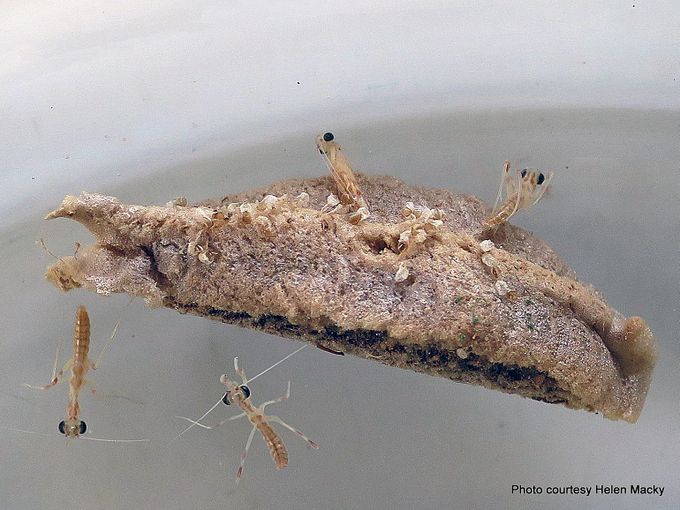 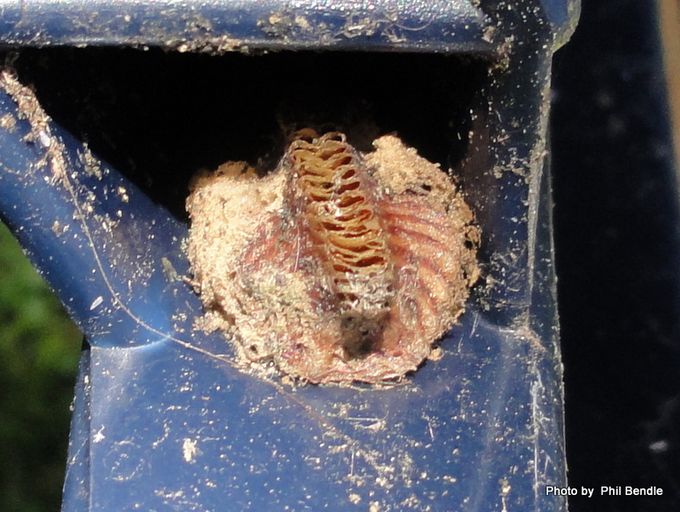 Thanks to Wikipedia for text and information   http://creativecommons.org/licenses/by-sa/3.0/