It is endemic to the North and South Islands and is common from te Paki south to about Okarito, North Canterbury and the Banks Peninsula.

It can be found growing from coastal areas to lowland (extending up 500 m. a.s.l. in warmer parts of the country).  It is usually an important understorey species in coastal forests. The New Zealand's subspecies is a small, densely branched, aromatic, dioecious tree with large heart-shaped fleshy leaves growing up to 5 metres.
It has tiny flowers which are on upright catkin-like spikes and occur on separate male & female plants.
The fruit which is only on female trees (2 to 5 cm) long is a whole lot of little fruit clustered on a central stem, green at first but changing to orange when ripe The seed in the soft, orange spikes that are a favoured food of many birds in late summer' 'and are dispersed by them..

The root, fruit, seeds and especially the leaves of the kawakawa plant were favourite medicinal remedies of the New Zealand Māori. In fact, the kawakawa is one of the only plants still used by the Maori people today. Externally, Kawa Kawa was used for healing cuts and wounds, as an ingredient in vapour baths, and also as an insect repellent. Internally, it was found to be effective as a blood purifier in cases of eczema, boils, cuts, wounds, rheumatism, neuralgia, ringworm, itching sore feet, and all forms of kidney and skin ailments. The leaves were chewed to alleviate a toothache. The bruised leaves drew pus from boils and skin infections. A drink made from the leaves helped stomach problems and rheumatics when rubbed on joints. The leaf, if dried and burnt is an insect repellent.

The name kawakawa in Maori refers to the bitter taste of the leaves.

Kawakawa is also used by the Māori for ceremonies, including removing tapu, and as a symbol of death, a garland of greenery worn by women at tangihanga.

The leaves are often covered with insect holes due to damage by Kawakawa looper moth caterpillar (Cleora scriptaria, Family: Geometridae). See photo below. 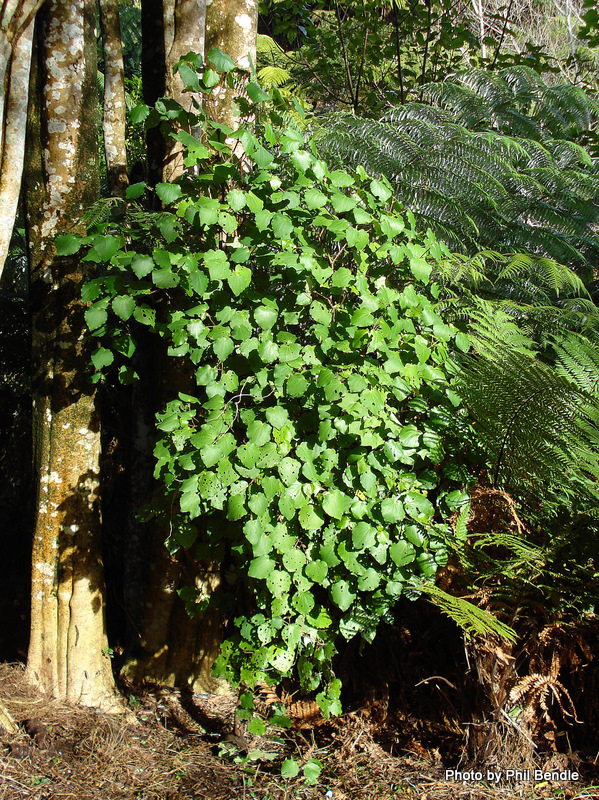 The plant is an uncommon plant because it and 10 other in the same planted area had no holes in their leaves due to being planted the city centre where the  Kawakawa looper moth are rare due to them be attracted to the bright street lights. 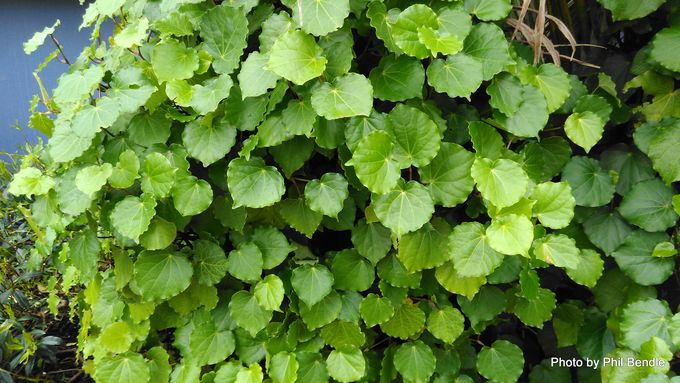 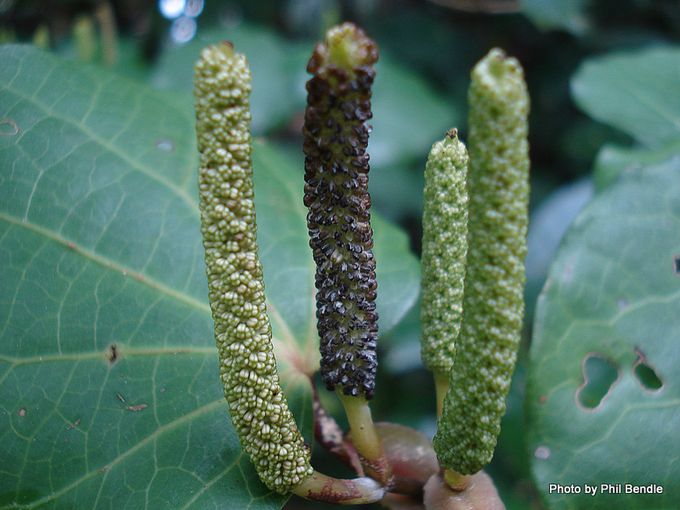 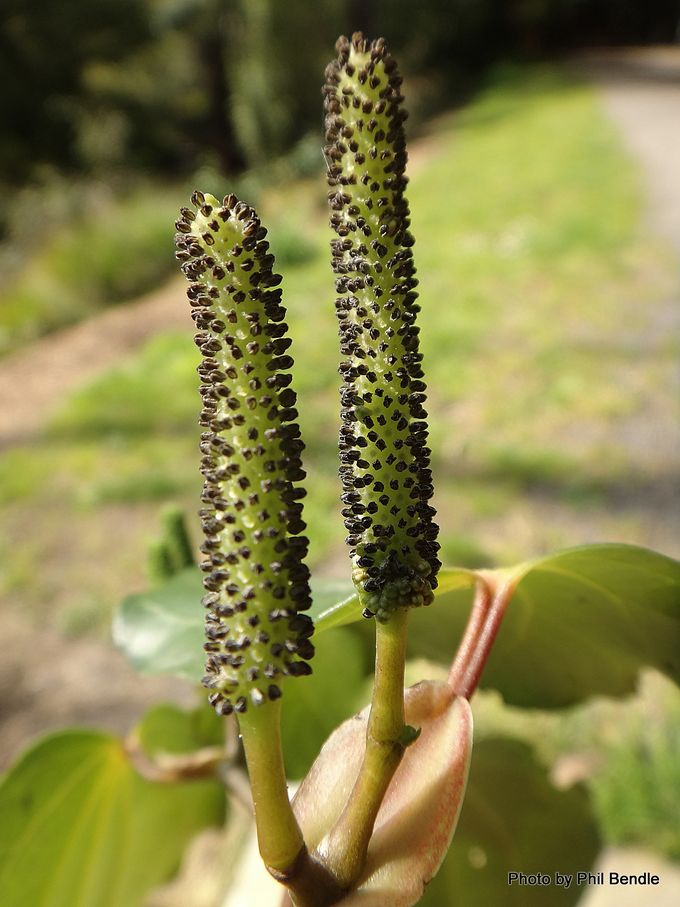 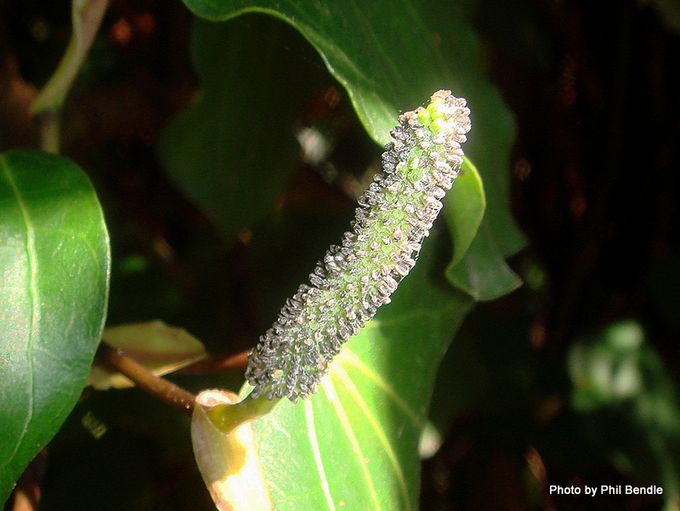 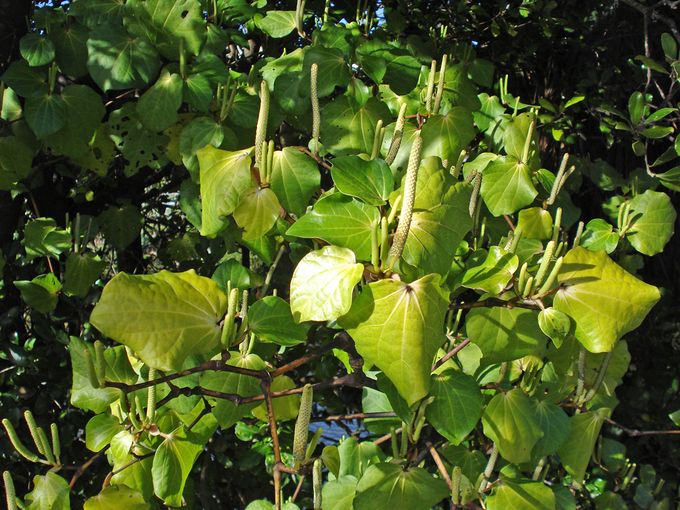 The photo below is of ripe fruit which is only on female trees. They are green at first, changing to orange when ripe. Each berry cluster is the size of a small finger. The ripening period is January and February. These fruits are favoured by kereru (New Zealand pigeon) and the tui (Prosthemadera novaeseelandiae). 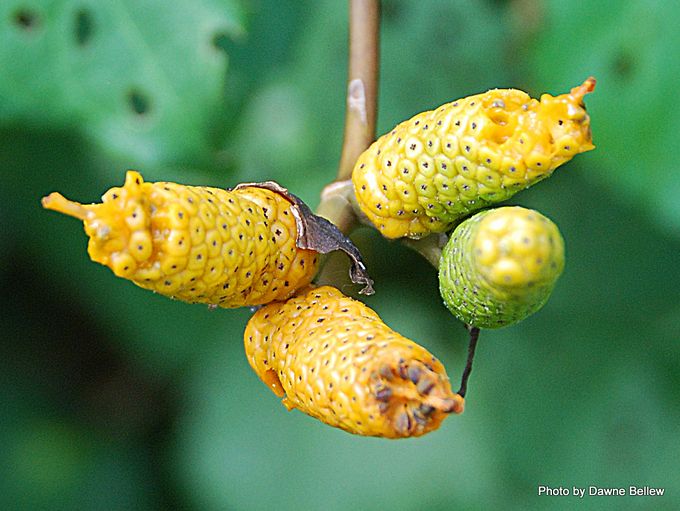 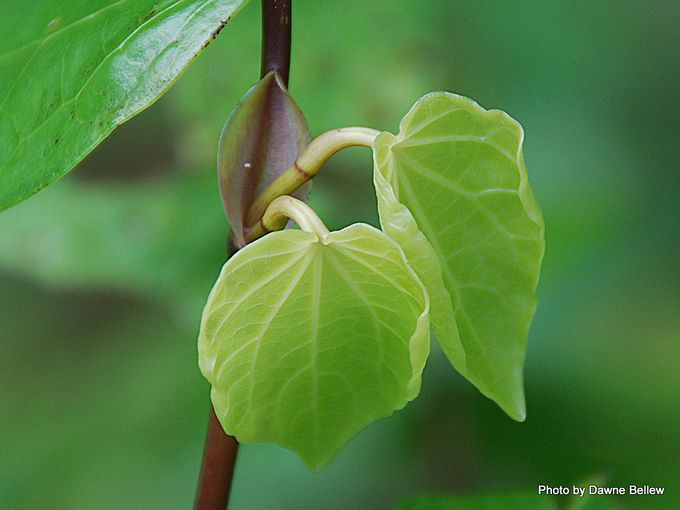 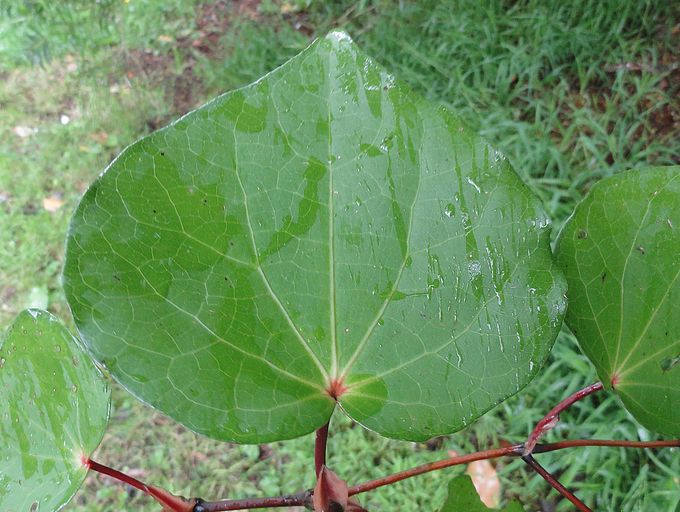 The under the underside of a leaf. 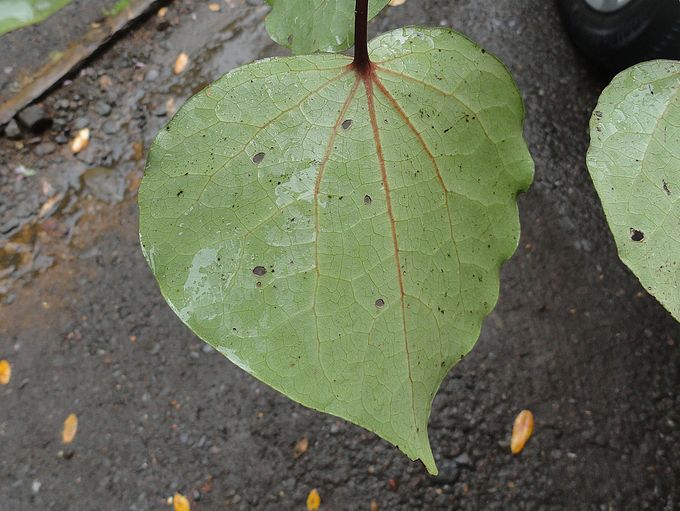 Common leaf damage by Kawakawa looper moth caterpillar Cleora scriptaria which are immune to the toxins in the leaf. Other leaf eaters also do not touch them because of these chemicals. 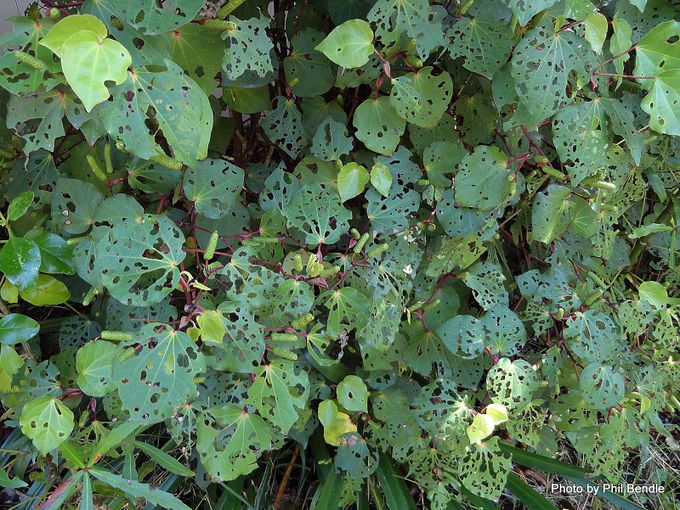 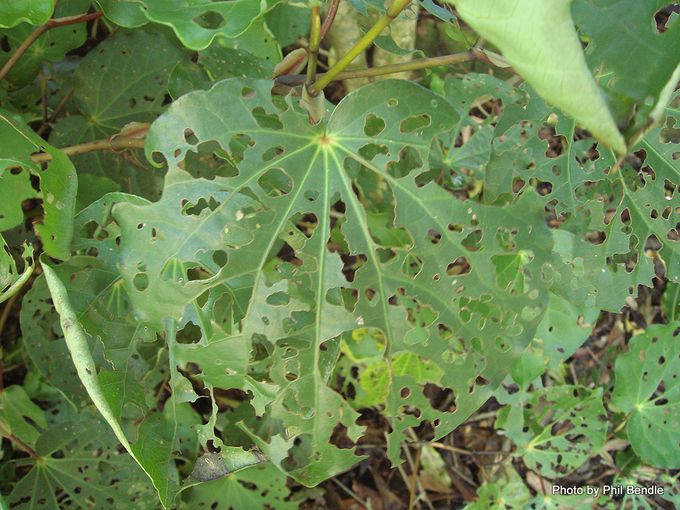 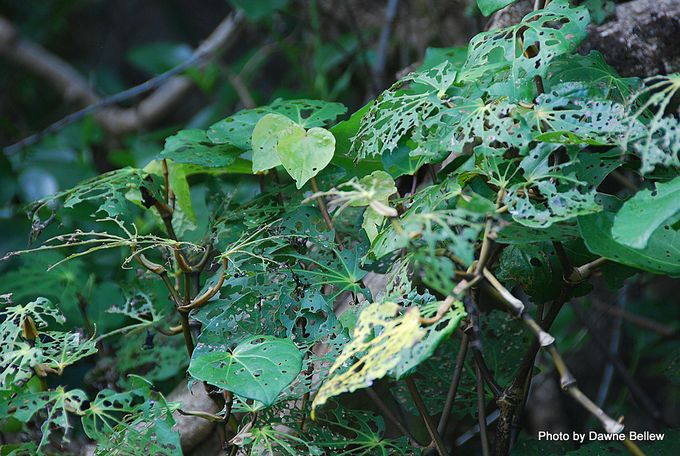 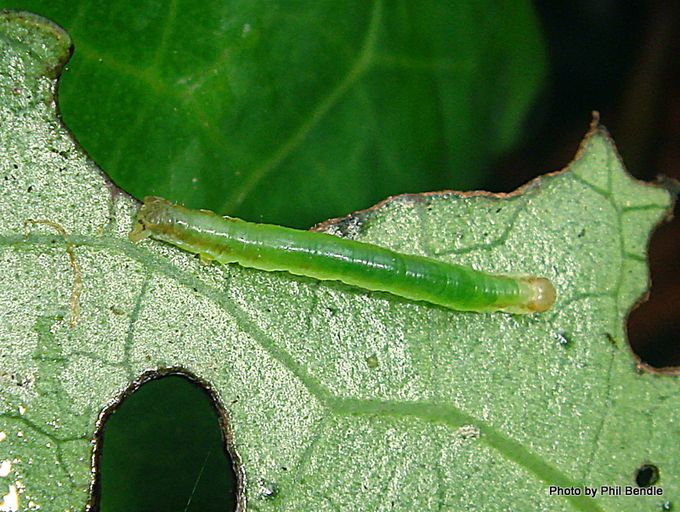 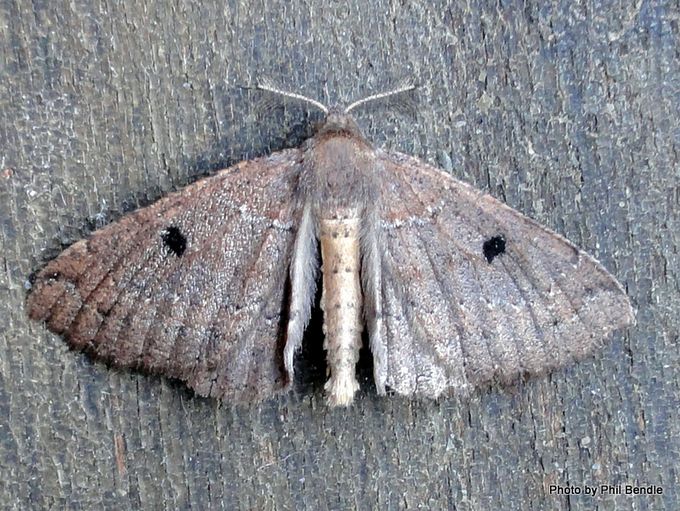