Neolema ogloblini is a tiny 5mm long beetle that is a dark, iridescence, metallic bronze colour. It is native to south-eastern Brazil and north-eastern Argentina and is host-specific to Tradescantia fluminensis (wandering willie, wandering jew). Neolema ogloblini was imported by Landcare Research and was released in 2011 after thorough testing checking that the flora and fauna of New Zealand were not at risk from it. It is reported that this was the first time in the world that Neolema ogloblini have been released as a biocontrol agent. Neolema ogloblini feeds on the leaves of Tradescantia and lays its eggs on the stalk. When the eggs hatch the young immediately start feeding on the foliage.

Tradescantia fluminensis is one of New Zealand’s most widespread and problematic weed in frost-free parts of the North Island and parts of the South Island. It thrives in shaded areas and grows as dense mats preventing regeneration of desirable plants of gardens and indigenous forests. It is hard to control with herbicide sprays due to its layered growth. 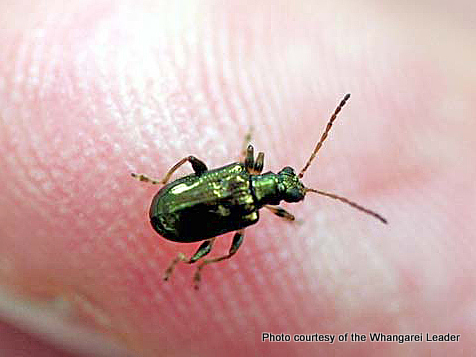