Longitarsus jacobaeae is a species of flea beetle native to Eurasia.
The biological control programme against ragwort began in the 1920s and was one of the first biocontrol programmes implemented in New Zealand against the nectar-rich noxious weed known as Jacobaea vulgaris (Yellow Ragwort). It has been established in many areas of New Zealand and has had a major impact on Jacobaea vulgaris populations.
The beetles have prevented entire populations of ragwort from reaching the flowering stage at several monitored sites. This beetle is most effective when used in conjunction with the cinnabar moth (Tyria jacobaeae), another ragwort biocontrol agent. The beetle is not known to attack other plants

The adult beetle is light golden brown in colour and between 2 millimetres and 4 millimetres long. The female is larger than the male, especially when gravid (carrying eggs). The beetle has enlarged femurs for its main locomotion method of hopping. The female lays eggs on or near the ragwort, its host plant. The larva emerges in about two weeks and burrows into the ground to feed on the roots. The larvae and adults are dually responsible for damage to the plant. The adult defoliates plants which are often already weakened by larval damage at the roots. This two-pronged attack is quite successful in preventing ragwort growth and development. 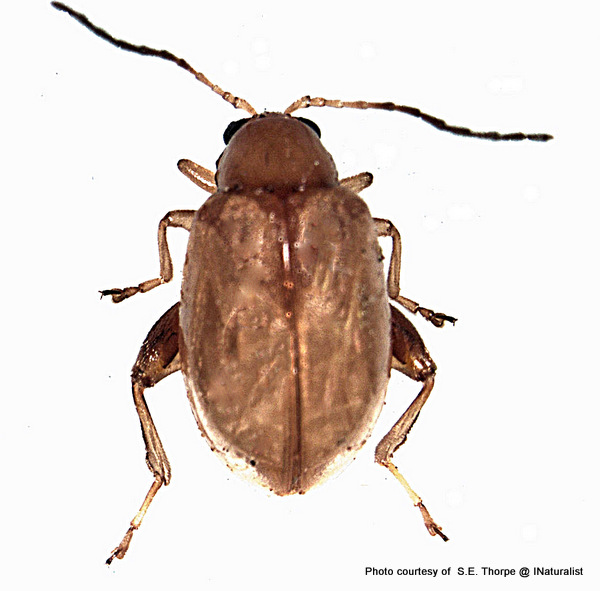 The photo below shows the size of a Ragwort flea beetle (centre) compared with the larva of a Cinnabar moth (Tyria jacobaeae), another ragwort biocontrol agent. 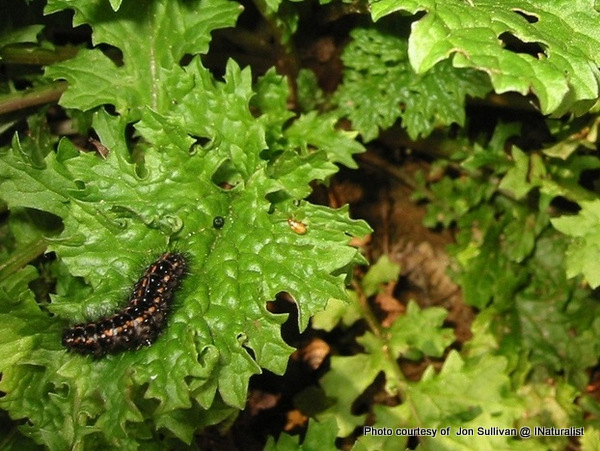