Ochrocydus huttoni is a pale brown native longhorn beetle (>35 mm long) that looks like a small huhu beetle (Prionoplus reticularis). They have been recorded in most places in New Zealand. They fly in the early summer months.

Ochrocydus huttoniis antennae are composed of smooth, stout, elongated segments. The male's antennae are longer than its body while the females are shorter and do not reach the end of their abdomen. In freshly emerged specimens the thorax and head are covered with light brown hairs. In older beetles, these hairs become somewhat worn away to reveal a dark brown to a black coloured surface. The thorax is narrower than the elytra (wing cases) which are light brown and have slightly tapering sides, a slightly ridged parallel venation, and an irregular pattern of shallow punctures. The elytra lack the strong net-like pattern of the huhu beetle but have a pair of more distinct spines at their rear ends. The abdominal segments, visible on the underside, are light brown with a darker brown band along each rear margin.

The O. huttoni creamy yellow larva may be up to 60 mm long and have a head bearing conspicuous jaws which are rounded at the tip and gouge-like. The top of the prothorax bears stout bristles along the front margin. On either side of each body segment except the third thoracic and ninth abdominal segments, there is a large oval breathing pore. Legs are well developed compared with those of many other longhorn beetle larvae.

O. huttoni larvae tunnel into the outer sapwood of several native and exotic trees. The main hosts are Leptospermum scoparium (manuka) and Kunzea ericoides (kanuka), Nothofagus solandri var. cliffortioides (mountain beech) and Nothofagus fusca (red beech). The Quercus spp. (oaks) and Agonis juniperina (juniper myrtle) have been recorded as hosts. They excavate short lateral tunnels then longitudinal tunnels (>15mm in width and >1m in length) in the living stem of the host. Bore dust is ejected through the lateral tunnel exit and an accumulation of bore dust on or about the lower stem of a living host is generally an indication of advanced infestation.
Before pupation, a pupal chamber is excavated and it can be up to 25 mm wide and 120 mm long, is plugged at both ends with coarsely shredded wood. There is a short horizontal tunnel from the pupal chamber to the surface of the host tree. This is later used by the emerging adult. Wetas are often present as secondary inhabitants in these abandoned tunnels and they keep the tunnel system open thus allowing the entry of a black stem rotting fungi.

It is interesting that the O. huttoni larvae are a much sought after source of protein by the Kaka. Below is the text of a research article by J. R. Beggs and P. R. Wilson of the Ecology Division of the DSIR.
Abstract: “Kaka (Nestor meridionalis meridionalis) studied in Big Bush State Forest spent 35% of their feeding time digging out Ochrocydus huttoni larvae from live mountain beech trunks (Nothofagus solandri: var. cliffortioides).
Larvae of O. huttoni have a high energy value compared to that of other insects. The assimilation efficiency for the energy of two captive kakas was 91 j: 3% when fed a diet of O. huttoni.
Using the energy intake of the aviary birds during the feeding trials, the requirement for existence metabolism at 8.5°C for 593 g kaka was about 490 kJ per day. This was consistent with estimates made using Kendeigh's allometric equations for existence metabolism.
Unless the cost of digging for O. huttoni was less than half that of flying, there would be a net loss of energy for a kaka feeding on the larvae. Kaka would need to balance their energy budget by eating other foods, the abundance of which may be currently threatened.”

Enlarge by clicking on the image 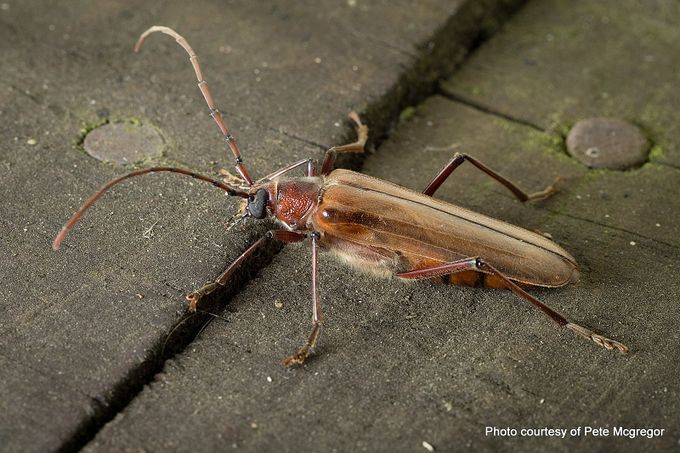